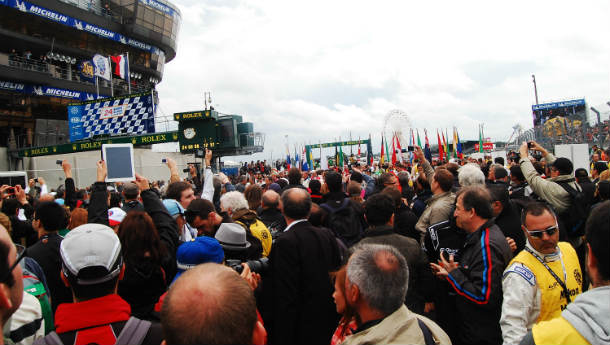 I’m standing at Indianapolis corner, watching as cars go past at a blisteringly fast pace. It’s cold, and I’d like to be in a place where I can feel my fingers and toes once again, but I’m rooted to the spot, because that’s exactly what those cars do to you. I can only watch helplessly as they come down and brake for the right-hander at Arnage. Things are a merry blur, I’m going slightly dizzy as I watch them go past one after the other, faster, it seems than my eyes can see.

Out of the dark a pair of headlights suddenly casts light on the track, emphasising the shadows around even more, the engine growls loudly, shattering the silence of the night, and then just as suddenly as it appears, it’s gone. The only cars that sneak up behind you are the Audis. They’re hushed and you can’t hear them coming until they’re already there. Like large silent silver sharks they whizz past making a gentle whooshing noise. It’s eerie. And it’s spectacular at the same time.

Standing there I realise that I’m actually at Le Mans (!) where the likes of Jacky Ickx and Tom Kristensen have etched their names in history, where Henri Pescarolo and Graham Hill won ensuring the allegiance of the French fans forevermore, where racers who’ve dreamt their whole lives of blasting down Mulsanne finally manage to do just that. It’s enough to give any motorsport fan goosebumps and, at that very moment, I’m thoroughly afflicted by that condition. You see, Le Mans is hallowed ground and my motorsport pilgrimage has finally come true.

It was 16th June 2008. I caught a flight out of Bangalore, landed in Mumbai, found my temporary accommodation (it was a PG where I would eventually lock the cook out of the house quite by accident and then spend my remaining days there convinced he was spitting in my food), closed myself into my room and bawled like a three year old. I’d just left my home of 20 years, my family, my friends, my life behind, all to pursue the dream of covering motorsport. And somehow, in that room on the 14th floor, actually covering motorsport seemed like such a ridiculous and far-fetched idea. What had I gotten myself into!

And then the pages of the calendar turned and turned some more. All of a sudden, I’m standing on the grid at the Circuit de la Sarthe, an hour before the race starts. And I realise that it’s the 16th of June, 2012. The universe couldn't have picked a better date for my pilgrimage, then!

Check out the August 2012 issue of BS Motoring for a full-blown Le Mans experience.