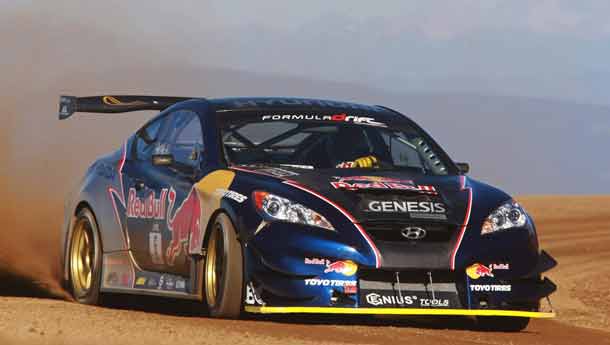 The Pikes Peak International Hill Climb that concluded yesterday saw 'Monster' Tajima hold on to his 2008 record, despite earnest attempts by Ford and Marcus Gronholm to crack it.

Ford, who had brought down two 800 bhp Ford Fiestas couldn't muster anything close to the 10 minute 01 second time that Tajima set in his Suzuki XL7 last year. Marcus suffered engine problems and a disintegrating rear tyre apart from the added weight of a co-driver - all of which eventually saw him register just 11 min 29 seconds around the course. His team mate, Swedish rallycross star Andreas Eriksson had an even worse outing, first crashing during the practice session and then again during the timed run.

Another impressive performance came from Rhys Millen in his Hyundai Genesis in the 2wd category. He set a time of 10 min 15.3 seconds in the Genesis coupe, specially modified for the Hill Climb. In the end, Tajima in his 884 bhp, 2.7-litre turbo V6 powered Suzuki SX4 set a quicker time of 10 min 15 seconds, but still some 14 seconds off his last year's record. Gronholm, meanwhile vowed to come back next year and be better prepared to take on the Hill that has been the dream of many a famous rally driver.