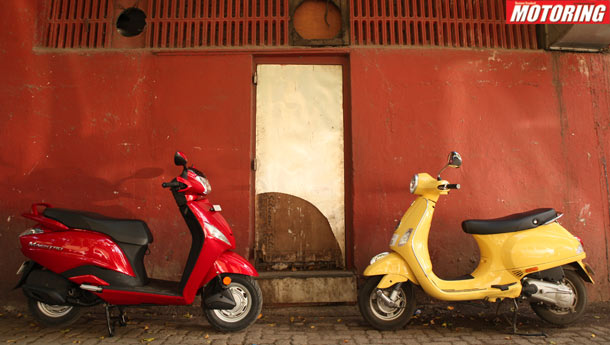 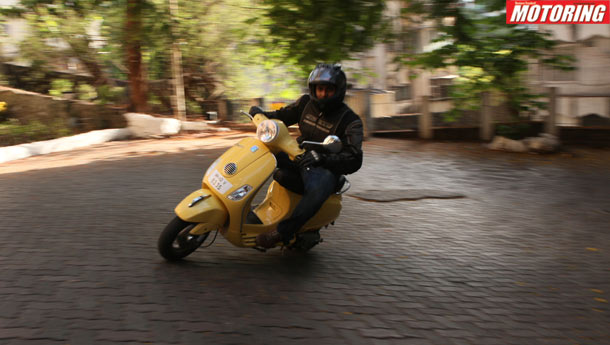 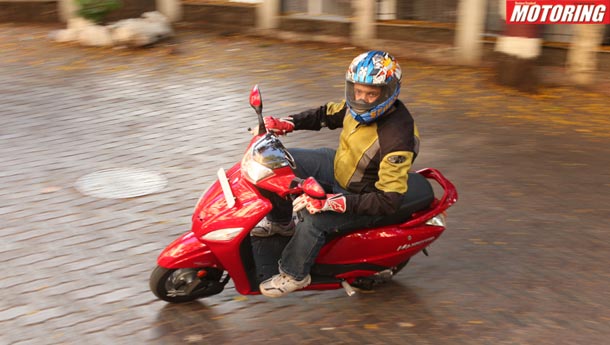 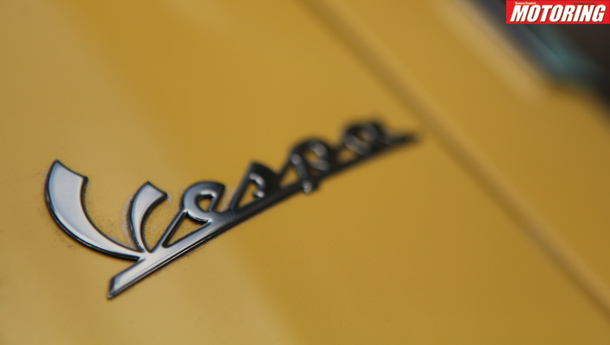 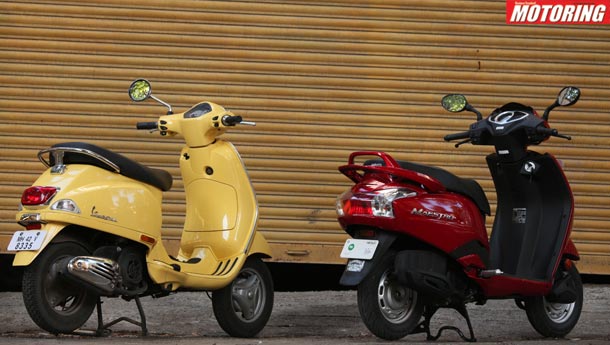 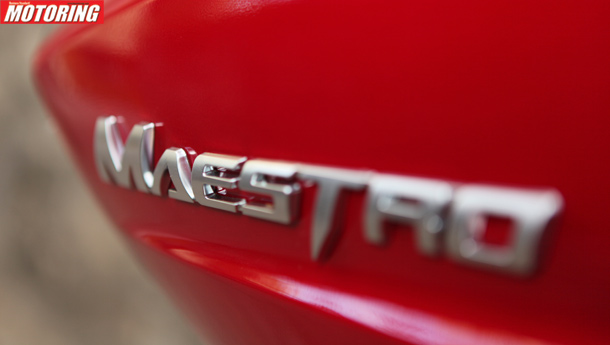 If you happen to leave these two scooters waiting outside a café, you’ll progressively see less and less of the Vespa and in about ten minutes, you won’t see it at all, as the cutest two-wheeled device on the market today is hounded by people left, right and center. They’re curious, they’re excited, they’re happy to see the Vespa again! Grandpas on their evening strolls reminisce about the good ol’ days on their Vespas, cars stop, people scramble to take a look, animated discussions happen, traffic slows down and girls look for a chance to take it home, but not before cuddling it and pinching its cheeks.

This is insane – I haven’t seen this sort of attention given to anything, Fireblades and Aston Martins included. As a launch pad, Piaggio, you couldn’t possibly have had it any better. It is advertising the Vespa as a lifestyle product, a niche, a step above the red scooter you see in the frame, and given that the red one is probably all the scooter you’ll ever need, does it make sense to succumb to the want for the Vespa?

Bellisima ! The Italian sense of design flair and brilliance is hard to match, isn’t it? The LX-series is an all-new design in the line-up since 2006, taking Vespa’s design forward in a suitably retro-chic manner, but without drowning in past influences. The ‘LX’ – Roman numeral for 60 – was to celebrate 60 years of the Vespa.

It’s not particularly big, the Vespa, and amidst the athletic, cutesy design are fantastic details – especially the single-sided front suspension (no one does single-sided wheels better than the Italians, no?), the retro-tastic headlamp and alloys, crisp and clean bodywork and chrome embellishments all around. Stylish stuff. Comparatively, the Maestro – based on the much-loved Activa platform – isn’t nearly as flashy and feels a bit odd in parts but thankfully, it’s much nicer to behold in real life. The only real innovation it brings to the segment is a nice digital-analogue display.

Detailing tends to be more garish than classy but hey, we Indians like it ‘like that only’. So, in terms of pure visual eye candy, there’s no doubt the wasp takes the cake and by a staggering margin. But does the Maestro make up for it by offering adequate turn of speed and superior practicality? We hop on and head out – but only after we make our way through the mob around the Vespa!

Pin it off the line and both the scooters fail to pack the get-up-and-go that the Suzuki 125s or the older Dios have. The Vespa runs a 125cc three-valve motor that’s good for 9.9 bhp at a peaky 7500 rpm and 1.07 kgm of torque, which gives you an idea as to what sort of performance it’ll deliver. It feels livelier than the Maestro throughout the rev range and is punchiest between 30-80 kph.

This new made-for-Asia three-valve motor provides enough thrust for you to happily cruise vibe-free even at 90 kph – excellent for a scooter – and it winds the speedo all the way to an indicated 105 kph. Impressive. If you switch to the Hero straightaway, it immediately feels slower revving and less eager.

The 109cc Honda motor makes 8 bhp and 0.92 kgm of torque and there’s a reason it performs and feels like an Activa – it is an Activa underneath. Ridden back-to-back, it almost feels like something is strangling it – in all probability, it’s the economy-biased tune – and it struggles to keep pace with the Vespa, especially beyond 30 kph. The best we saw on the speedo was 83 kph and we had the throttle pinned. Not much later, I simply gave up trying to catch up with Kyle on the Vespa. It’s only 15cc worth of difference in displacement, but it’s a very noticeable one in the real world. In almost all aspects, the Vespa feels much livelier and more responsive – but weirdly enough, the performance data adds a new twist to the tale.

In terms of pure numbers, it’s the Maestro that inches ahead initially up to 20 kph, but then the peaky Italian motor starts building steam and the two are neck and neck at 40 kph, and by the time they hit 60 kph, the Vespa’s pulling away effortlessly. Rorty and happy to be on the throttle, the Vespa is definitely the more fun-to-ride scoot here.

The Vespa is the smaller of the two and as a result, much more nimble to dart across the city on. Effortlessness could well be the theme of the Vespa. With a tight monocoque chassis, quick steering, a generous steering lock and nice, upright ergonomics, it’s a joy to ride. For a quick, fun dash across town, the Vespa’s point-and-shoot nature is thoroughly enjoyable.

The excellent ride quality is courtesy the single-sided trailing link at the front and the monoshock at the rear.

Do note though, that it’s a little cramped for taller people and two-up, you’re jostling for space. This is where the Maestro fits in well – especially if it’s going to be the family runabout.

It feels more substantial than the Vespa, and is roomier on the whole. While the Vespa is ever eager to turn-in, hop and skip its way through a set of corners, the grown-up Maestro feels more planted. The Vespa might be the more athletic of the two, but there’s a downside – it feels flighty around corners and it becomes more fidgety as the speeds increase. Even on the highway, it’s highly susceptible to crosswinds, where you’re blown into the next lane every time a big vehicle passes you.

This isn’t nearly as bad as the front brake, which offers no feel whatsoever.

That would’ve been a bad thing, had it provided any sort of braking power in the first place. The rear is better – it can at least provide enough power to lock the wheel. Frankly, at this price, the Vespa needs to have a disc brake up front, both as a value and safety addition. The Maestro is much more stable at speed and around corners while offering ride quality that’s almost as good as the Vespa. It’s also better off when you drop anchor, helped by Honda’s Combined Braking System that actuates both brakes when you grab the rear brake lever, helping novices in no small quantity.

For something being sold as a product, the Vespa skimps on basic features like a trip meter and a handy brake lock, both of which are found on the Maestro. Build-quality wise, the Vespa clearly needs some attention. In the week that we had it, the mirrors swung loose repeatedly, the seat lock went on strike (a common Vespa LX problem, Google told us) which led to a bit of a crisis, and that’s not including uneven panels gaps, paint inconsistency and not-so-premium switchgear. Well, the Italians were never known for their (‘ow you saaay…’) build quality, and when you factor in a new manufacturing unit, problems like these are inevitable. Hopefully, they should sort these niggles out in due time. The Maestro, on the other hand, is typically well-built on a proven Honda platform – save for a few minor details, everything fits well and should hold up to some abuse.

So here’s the deal. Looking at it purely as a value-for-money proposition, the Italian cutie here is outgunned. Hero’s scoot is Rs 18,400 cheaper, Suzuki’s 125cc Swish is 18 grand cheaper while the new 109cc Dio is a staggering Rs 21,800 cheaper. That’s a lot of money over and above some fantastic, practical options. Sure, if you’ve got the dosh and adore the brand, go for it but keep in mind that it doesn't quite convincingly justify its price tag yet. Some would argue that this is not something you should look at objectively, but I beg to differ – the true aficionados  will buy a proper, classic Vespa and leave this one for the posers.

It’s a good scoot, no doubt. It’s loads of fun, dynamic, quite a looker and has a brand heritage to boot. And come to think of it, it’s the cheapest proper Italian product you can buy today. Don’t get me wrong – I’m unabashedly a Vespa fan – but at this ‘lifestyle product’ price point, I need a disc brake, better build quality and the few niggles here and there sorted out. I have no doubt that Piaggio will find buyers for it initially, but to build a solid brand image around the Vespa, they need to refine the scooter even further.

As for the Maestro, it’s fairly identical to the Activa – which it basically is – but if you want different styling and a few novel touches, going for the Maestro would work for you. With regard to the premium scooter experience, as hard as it is for my heart to resist the charm of the Vespa, at the moment, I think I’d pick sushi, with a hint of India in this case, over pasta. The sad thing is, we could really do with some pasta that’s made just right.