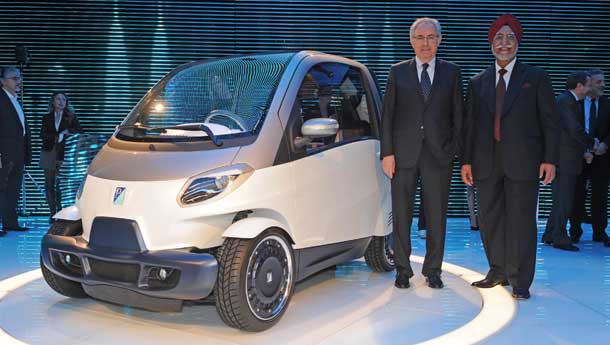 Well, the micro/city-car bug has bitten the two wheeler manufacturers after all. Ever since Bajaj announced its plans to develop a small city car with Renault and Nissan, the other two and three-wheeled manufacturers have been watching this space with interest. And now, it's the turn of Piaggio, manufacturers of Vespa scooters and Ape three and four-wheeler commercial vehicles to jump into the fray.

At the EICMA show late last week, they showed a three-seat small car concept for markets such as India, Vietnam and South East Asia. Called the NT3, the concept measures no more than 2.4 metres long, making it shorter than even the 2.64 metre long Mahindra (Maini) Reva. Using a seating layout very similar to the McLaren F1 supercar, the driver and the steering wheel sit in the centre with the passengers on either side, slightly offset to the rear.

The NT3 uses a spaceframe structure with a crash box to give it rigidity and keep the occupants in a safety cocoon. Using a flexible platform that can be used for diverse transport applications, the NT3 is also designed to utilize a hybrid powertrain.

Three powertrains have been designed for the NT3. A basic 200cc motor, a more powerful 300c motor that uses technology from the Piaggio Mp3 three-wheeled scooter and a 300cc hybrid motor that mates the internal combustion engine to a electric powerpack form the triumvirate of options. The latter is designed to travel at top speed of 80 kph, with the electric pack designed to solely run the car at speeds of 30 kph or under. All these motors are designed to deliver over 30 kpl under standard test conditions.

The rest of the car is pretty much traditional small car in construction using McPherson struts at the front and "Omega" suspension at the rear that also acts as the load bearing carrier for the powertrain. No discussion about price tags or launch dates have yet been discussed, but we think it will be priced a little above Rs 1 lakh and go up to Rs 2 lakh for the hybrid version with its launch in the next 18-24 months. Stay tuned for more updates.