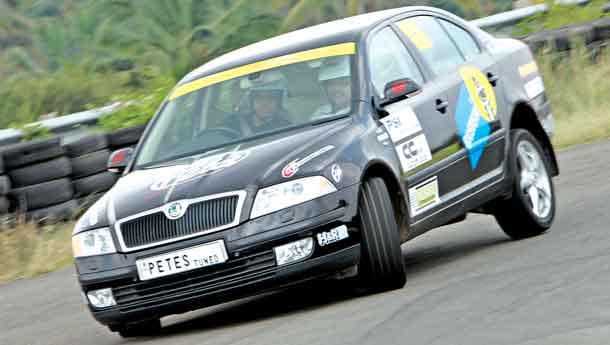 If you are an automotive enthusiast, you’d better know Autothority. If not, well in 2001, a heavily modified, 750 bhp Porsche 996-911 drove 11 hours to Car and Driver’s proving grounds for the annual tuner slugfest, hammered around the track for hours, stood second to a Lingenfelter Corvette and then drove back home. While everybody else put their cars on trailers and put them back after the event, Autothority showed that their cars are reliable enough to be driven cross-country, shred rubber for laps around a track and be driven back like just any other car. I’m sure Peter secretly wishes that his tuned cars, one fine day, will do this like it was in their genes.

Now if you don’t know Pete’s then you better start knowing him. Peter Chacko from Kochi is the man responsible for those faster than normal diesel cars that you encounter once in a while. Okay, some part of it is also down to driver skill, but trust me, most of it is also down to those PSI tuning boxes that make all the difference. But Pete’s is more than just diesel tuning paraphernalia, which is why he decided to fly some of us journalists out to Coimbatore’s Kari Speedway to sample his entire range of products and gauge the actual performance improvement of a ‘Peted’ car over a stock car.

So yes, we got the usual suspects – pairs of Swift, Laura, Logan and Innova diesels and then a couple of 300 bhp Octavia vRS to provide some relief to us petrolheads. Pete’s also managed to collect some demonstrators like a VW Passat, a BMW 3 Series, a new Mercedes C-Class and a last-gen Audi A4. So what do you expect us motoring journos to do if a 2.2 km track and tuned cars are left to our disposal? Er, burn rubber right? Yup, that surely did happen. The reason why Pete’s gathered pairs of each car was to highlight the difference between a lightly modified car and a relatively heavily modified one. So for instance, the Swift diesels ran with PSI boxes, Cotton Green Air Filters and Borbet wheels, the second added H&R coilovers to the equation. Now all of that performance enhancement kit needs a mechanism to channel it down to the road and these performance suspension units do just that. And on a track the difference is telling. You can afford to take a much tighter line and spend less time getting off the throttle moving around corners, instead putting down the power quicker as you exit. The end result might lead to substantially faster times around a circuit, and as you know a second saved on a track is like an eternity saved.   It was startling to see how cars like the Logan changed behaviour, for example. The stock car was placed on the track with a set of Borbet wheels and while there was some benefit in terms of reducing the unsprung weight, the car still rolled, you had to brake early and then spend a lifetime before you got out of the corner and on the power. No such drama from the No.2 Logan that had Bilstein suspension, H&R springs, a tuning box and performance air filter added to the package. Now the Logan was straightlining most of the corners, rolling far less and putting down the power more cleanly as understeer was nearly dialled out.

It was even surprising to see similar performance from cars like the Toyota Innova. The higher centre of gravity could no longer be felt thanks to those suspension units. But as the performance envelope increases, one needs better brakes and Pete’s supplier Tarox provided just some such units for the Lauras and the Octavias. It was much easier to shed speed without having to stand on the brakes for longer, while helping the car stay more stable. As temperatures soared on the track, the brakes started to raise some steam, but they performed without a fault. Of course, one must realise, a hard day at the track can put even the best made after-market performance kits through severe strain, so given the conditions, they didn’t perform all that badly.

Morning turned to evening and several laps later I came to the conclusion that a well put together car with after-market performance enhancers can be a very good tool around a track. No doubt then the multi-billion dollar tuning industry is one that OE manufacturers detest. Though one must realise man’s obsession with speed has never waned, even in oil crises. It’s an inherent and in-built desire to feel capable of doing more than what the human body can achieve, even if that requires a tool to break that envelope. Performance tuners are just that window of opportunity for us petrolheads to explore, though all of this shouldn’t be at the cost of reliability. And Pete’s showed just that by driving the cars to the track and back to Kochi. Maybe, they did read that Autothority story somewhere before.