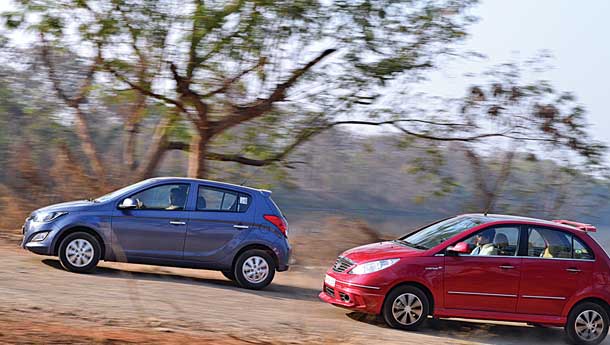 Though performance might be very important to a potential car buyer, the wallet always tends to disagree, and even if it did agree, there aren’t many options in the hot hatch category which are worth the sacrifice. There are the Polo and Fabia 1.6 twins, which perform brilliantly, but they do tend to help themselves to the contents of your wallet ever so often.

So, what does the enthusiast do, then? Turn to diesels, that’s what. Pretty much everyone knows by now that diesel cars these days aren’t the clattering , sluggish, pollution boxes they once were. In fact, the newer diesels are even fun to drive in the right applications.

Today, we have with us a couple of diesel hatches which promise a combination of great performance and fuel economy, so let’s check them out, shall we?

In the red corner, we have the newly launched Tata Indica Vista D90. The Indica swaps out its 74 bhp heart for an 89 bhp version of the same engine. On the outside, there are quite a few noticeable changes. For starters, this version is only available in VX and ZX+ trim levels, which means you get a contrast roof and a whole splattering of badges on the rear tailgate. Apart from that, there’s a dealer installed body kit that our test car came fitted with. Let’s just say, it’s not to everyone’s taste. The front end looks like it could possibly substitute for a bulldozer in a pinch; the rear end features a very prominent wing up top. If you forego the body kit, it actually looks pretty decent, I think.

The i20 in the other corner also received a facelift recently, but its heart remains the same 1.4-litre, 89 bhp diesel mill it’s always had. The facelift gave it new headlamps, re-profiled tail lamps and a few other changes to bring it in line with the rest of the Hyundai line-up. Of these two, the i20 ends up looking better.

Of course, the new heart is the most significant change to the Vista, but the interior, too, gets a significant update. Now, I’m not a huge fan of instruments placed in the middle of the dash, and thankfully, the D90 ditches that in favour of instruments mounted in front of the driver. The dash is lifted straight off the Manza, but material quality and general fit and finish are more than acceptable. There’s even automatic climate control and a segment first, a built-in touchscreen infotainment system with GPS navigation in the dash.

A lot has gone into making sure the D90 feels premium, and that includes things like noise insulation. On the move, save for some road noise, not much else intrudes into the cabin. Even the engine noise is kept away, only creeping in once you’re in higher RPM. Overall, this is a huge improvement over the normal Vista.

Interior space has always been an Indica strong point, and that continues with the D90, which has more than enough space for five passengers. It’s their luggage that will be left behind though, because the boot space doesn’t match cabin space. There is a 60:40 split folding mechanism though, if you want to lug some cargo around.

In the interior department, the i20 seemingly can’t put a foot wrong. It’s got all the features you could possibly want and good ergonomics to match. It matches the Vista feature for feature, save for the touchscreen system and navigation. It’s even got a nifty armrest on the driver’s seat which comes in handy on longer trips. It also has ample boot space to match the interior room.

For the more powerful version of the Indica, Tata decided to stiffen up the suspension a little to match the go. No components were changed, but the rubber components were swapped out for stiffer units. The result is a car that is more sure footed around bends. It still manages to soak up bumps quite well, too; it’s only just a little stiffer than a regular Indica. The downside is a very large turning circle, though. Manoeuvring the Indica in tight lanes can be quite a chore, and you might as well forget about taking U-turns in one shot on normal roads.

Though it’s not exactly fun to drive, the i20 is certainly a breeze to drive in the city. The very light steering and controls make for a stress-free driving environment. You can turn the car around using only your little finger, but that same feeling gets a little disconcerting as the speeds rise. Small movements of your arms make the car dart around on the roads. On the other hand, the ride quality is plush enough to iron out any irregularities in the road surface

The party piece of the Vista D90 is the uprated 1.3-litre diesel engine, which now features a variable geometry turbine. The same engine is used in the Manza, SX4, Ertiga and Punto as well. In the Indica, it offers good response right off idle till about 4000 rpm. The turbo really kicks in at around 2500 rpm, and from then on, you’ve got more than enough power on tap to shove you back into your seat.

Don’t be fooled by its sporty positioning though; the Indica is rated for an ARAI certified 21 kpl, which is brilliant considering it sprints to 100 kph in 13.2 seconds and goes on to hit 162 kph.The five speed gearbox has well matched ratios and the action itself is a definite improvement over the normal Indica. The i20 comes with a 1.4-litre diesel engine that makes the same 89 bhp as the Indica and at the same rpm as well (4000 rpm) but it does make a smidgeon more torque from a lower rpm. On the move, you’ll notice that the i20 is definitely quicker; 0-100 kph is done in 11.1 seconds as it goes on to a top speed of 174 kph.

There’s a 6-speed manual sending power to the front wheels, but the shift action is a little notchy and it’s easy to slot into the wrong gear on this box. It’s not a big problem, but it’s not too enjoyable either.

All in all, both of these seem to be pretty evenly matched, with the i20 maybe slipping ahead on a few counts. But it’s important to note that, as tested, there is a Rs 80,000 difference between the two cars, with the Indica being the cheaper one. And at that price, it really is a good deal. Which would I buy? To be completely honest, I’d take the Vista D90, without the body kit, of course.