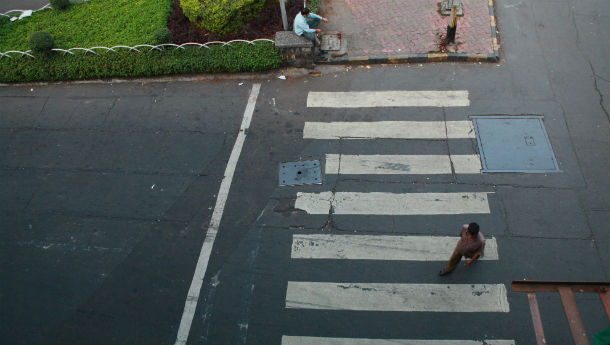 It's quite easy to target road users, no? You can pull up motorcycles for their loud exhausts and their ability to wheelie, cagers for not moving fast enough, buses for running people over and trucks for being so old, they make the Stone Age appear recent. However, there's one section of road users that have so far escaped the wrath of the law. Pedestrians. I think they sort of urgently need to be given the stick.

A week or so ago, a middle-aged gentleman crossed a busy street soon after the lights for vehicular traffic went green and got me into a front-wheel lock situation (I caught it in time, but it could have been worse) on a knobbly-tyred motorcycle. On a paver block-ed road (one of the marvels of Mumbai's administration!), no less. Surprisingly, he was quick to hand out a few juicy expletives and only after much reciprocation from my end and an indication to send him home on a wheelchair did he realise I had just saved him what could have been a very painful trip to the orthopaedic surgeon's. This happens all the time. At intersections, most peds can't be bothered waiting for the lights to indicate it's a free-to-walk but instead gauge, often wrongly so, the oncoming vehicle's speed before casually strolling across the street, as if it were part of the imaginary park they seem to be walking in. On the Eastern Express Highway, the fast-ish 20 km stretch that connects Thane to central Mumbai, there are several skywalks connecting the divided ends but the day I see a human on one will be the day I will inherit a fortune, or an eight-headed elephant. Instead, we have people leaping out of the bushes on the divider, and darting across the road in a game of Life and Death. Usually, it's the latter. .

Now, this is certainly a controversial thing to say, but I'll risk it anyway. I deal with stubborn and careless peds with my glove. The only exception I make is towards women, who don't get the 'glove and expletives' treatment but a subtler scream and a piece of my mind. The idea behind the glove is not to physically hurt but to embarrass and enlighten. If you were out on the roads, walking, and were flicked hard by a leather glove, wouldn't you be very annoyed? But, because you're sensible, smart and educated, wouldn't you also go to the root of the matter? The why? And once the lights come on, you would be kind enough to not violate the laws of road usage and of common sense, right? Road users already have a lot to deal with. All classes of vehicles share the same piece of tarmac (or paver blocks, if you please) and there is hardly any systematic lane division. We have little patience, show even lesser courtesy and have the manners of creatures God created before he created man. Add a few peds to the picture and the world isn't going to need a WW3 to come to a premature halt. I hope you get my drift.