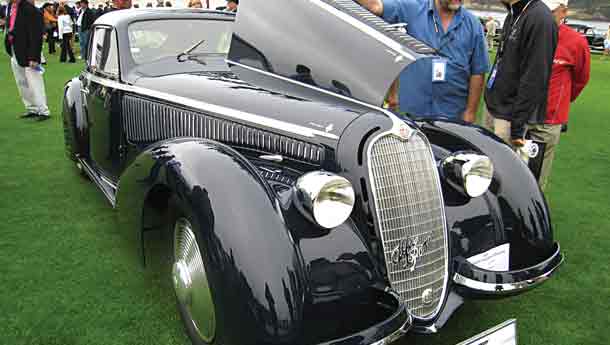 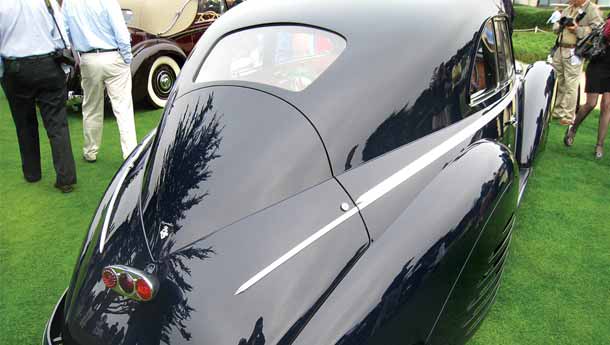 The US economy tanking, cost of fuel going through the roof, banks failing left and right, government bailing out big names, massive layoffs, rampant inflation, threats of deflation and bear markets were all worries for the ordinary working blokes.

However, the Pebble Beach Concours (a triple digit cost to enter!) was packed with thousands of admirers as usual. The golf course was full of cars, with their owners and staff scurrying around their priceless metal, spraying them down with high dollar compounds and wiping off those last bits of dust. On the outside, people were giving interviews on TV about the hardships they face purchasing gasoline at $4 per gallon. On the inside, a crowd was gathering at the ‘Class S’ lineup, watching and listening as a video crew filmed one of the entrants firing up his Rolls-Royce Phantom II.

Some of you maybe wondering why the crowd, film crew and Jay Leno himself were so enamoured by a lowly Phantom II and its 7.7-litre six cylinder. This was the 20+ litre class. Some intelligent bloke (less familiar with ‘Why?’ and more familiar with ‘Why not?’) had acquired a war surplus Rolls-Royce Merlin V12 from a retired P-51 Mustang and installed it in his Phantom II. A writer more gifted than I termed it ‘to give literal meaning to the flying lady on the grille’. P-51 Mustangs equipped with a Merlin could make almost vertical climbs, such was the power output. I would like to point out that a Phantom II weighs significantly less than a P-51 Mustang. I immediately asked ‘average kithna?’ and the answer was 400 litres per hour! Along with the 20+ litre class, this year’s Pebble also showcased 100 years of General Motors (there were the futuristic cars from Harley Earl’s Motorama) and a special section on V16s (gasoline prices? Ha!). Anyway, the next issue of BSM will have a report on these.   I went through the entire day, and no one brought up petrol prices even once. Most of the day was cloudy and cool, which solved the usual 11 am dilemma (what to do with the jacket?). The lack of bright sunlight made photography easy, until the crowds started showing up around 10 am. Oh, and I did run into Sir Stirling Moss, and had a few words with him regarding what it was like to race in the days before safety equipment. Here are the pictures then…

1938 Alfa Romeo 8C 2900B Touring Berlinetta
The one that walked away with the honours (See Lust section in the front of the magazine). Equipped with an inline-eight displacing 2.9 litres, fitted with dual superchargers and dual overhead cams, producing 180 bhp, the Alfa has no trouble holding its own on the Expressway 70 years later. Owner Jon Shirley claims that with the all independent suspension, it handles the pace of modern traffic with ease.

1930 Cord L-29 Phaeton Sedan
This car was powered by a Lycoming straight-eight and was the first US production car with front-wheel drive, allowing lower overall body height.

1953 LanciaAurelia
This was a rally winning car, driven to first place in the Liege-Rome-Liege event. This rare Lancia factory race car, with a 139 bhp six-cylinder motor, was restored to original specifications.

1949 Auto Shippers Special Indianapolis Race Car
Powered by a four-cylinder Offenhauser, it competed in the 1949 and 1950 Indianapolis 500 races. The car currently resides in the, ahem, Mallya Collection.   1952 Lancia Aurelia B53 Giardinetta
After the war, one of Italy’s oldest coach builders Viotti created 47 station wagons based on the Lancia Aurelia chassis – one of the most advanced production cars of its day. This car was found in a field in Sardinia, neglected, but complete. It was comprehensively restored in Italy, and is one of only two survivors. The engine is Lancia’s state-of-the-art narrow angle 2.0-litre V6.

1930 Jordan Model Z Speedway Ace Roadster
This car is the only known example of the final and finest effort of the Jordan company a year prior to its demise. Founder Ned Jordan was remembered for his advertising flair. This is probably the rarest car at Pebble this year.

1937 Mercedes-Benz 540K Sports Cabriolet A
This was the fastest production road car of the 1930s and is powered by a 180 bhp 5.4-litre monster with Kompressor. Sindelfingen’s cabriolet style is among the most desirable.

1932 Alfa Romeo 8C 2300 Le Mans
Raced twice at Le Mans... DNF both times! The engine is a light-alloy straight-eight with twin cams and supercharger, and the custom coachwork is by Touring of Milan.

1929 Isotta-Fraschini Tipo 8A
One of the most expensive cars of its day, this 1929 Isotta-Fraschini was brought to England by an Indian prince studying at Edinburgh University in 1931. Buttons in the rear passenger compartment were used to communicate with the driver (left, right, quick, slowly, turn, home, stop). The car was powered by a 7.4-litre straight-eight with 115 bhp and could attain 130 kph.  The Coupe de Ville bodywork is by Cesare Sala of Milan.   1938 Talbot Lago T150 C SS Figoni et Falaschi Coupe
One of the best examples of beautiful pre-war French styling coupled with fabulous performance from a four-litre inline-six. Nicknamed ‘teardrop’, this car won awards at every major French concours before the war. This car was purchased new by the ex-chairman of Bentley Motors. He has taste.

1936 Horch 853 Cabriolet
The German Horch 853 was luxurious, but priced under Mercedes models, and quickly became a top seller. It could attain a top speed of 130 kph via a 105 bhp 5.0-litre single overhead cam straight-eight. This Audi predecessor’s advanced and innovative technology drew heavily on the Auto Union racing programme.

1939 BMW 328 Roadster
An aerodynamic sportscar with tubular space frame, powered by a 80 bhp six-cylinder, the roadster could achieve 160 kph. The car was priced at just $3,500, a bargain price for the performance on offer.