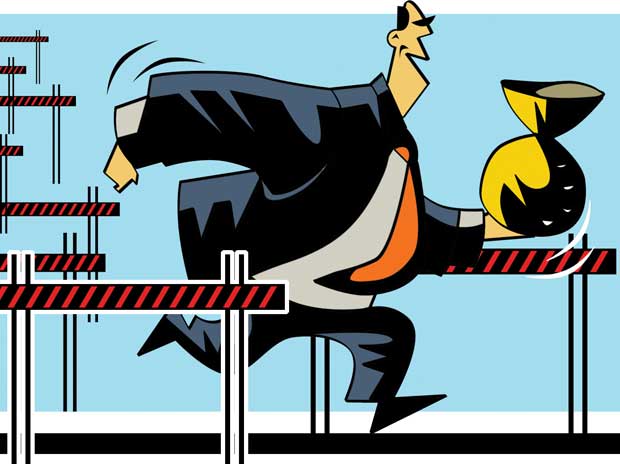 The last few weeks have been hectic but fruitful for international private equity (PE) funds that had bid for stressed assets. To begin with, the committee of creditors (COC) approved a revised joint offer for the assets of Monnet Ispat and Energy from AION Capital and JSW Steel, the sole bidders. Monnet, which owes the banks over Rs 120 billion, was among 12 companies to be referred to the National Company Law Tribunal (NCLT) for the insolvency resolution process last year.

Keeping AION company was Bain Capital, which tied up with Dalmia Bharat to make the highest bid for troubled Binani Cement (Rs 62 billion) just ahead of its nearest rivals Aditya Birla Group’s UltraTech Cement. Where AION-JSW were the sole bidders for Monnet, four bidders competed for Binani Cement. Meanwhile, a joint equity fund between Bain and Piramals is also competing with the Tata group for control of Bhushan Steel.

If the latter two bids succeed, they would mark milestones for other PE funds, which are waiting on the sidelines to turn on the money taps in what is India’s biggest stressed assets sale ever. So far, most PE funds have backed out after showing initial interest, discouraged by the complexity of the bidding process or the frequent changes in the rules.

Monnet is a good example of PE funds’ outlook. The company initially attracted 11 bidders, with TPG, Blackstone and SSG Capital submitting expressions of interest. Despite numerous extensions for the last date of bidding, AION (a joint venture between Apollo Global and ICICI Venture) remained the only bidder. In the case of auto component manufacturer Amtek Auto, AION, Bain, TPG and Farallon Capital also backed off after showing initial interest because they did not find the recovery plan viable.

What explains this caution among PE funds? PE fund managers say privately that they are looking for some success stories, and much will depend on the next two months when two or three of the big deals come up for final resolution. “If PE funds with their partners get two of the 12 deals we will see many global players coming in,” says a senior executive of a leading PE fund that has bid for several stressed assets. He estimates that these funds could bring in Rs 30-40 billion if some of these deals fructify.

Apart from the big international PE firms, funds that target mid-sized companies could also join the party for the next round of 28 stressed companies, he adds. These companies have a debt of Rs 40 billion to Rs 80 billion and revenues of over Rs 20 billion, which he says are attractive bets. Round II has, however, already been delayed by about three months. Much also depends on whether strategic Indian investors crowd out the PE funds. 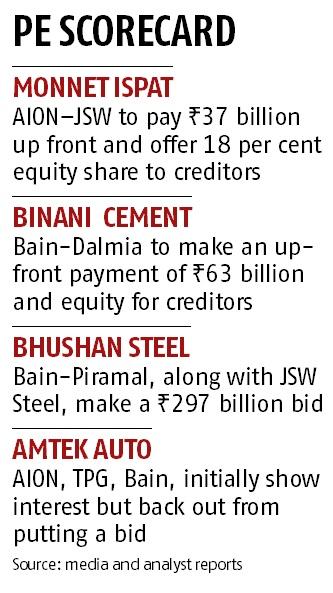 Indeed, PE funds squarely blame the lack of interaction and transparency between the potential buyer and the resolution professionals (RP), who represent the sellers, as a key problem area. Unlike typical merger and acquisition deals, to which PE funds are accustomed, RPs they say don’t provide adequate data on the target company, offer little scope for detailed due diligence and don’t organise even adequate factory visits. In short, they say, the process is ad hoc and opaque. “The RP initially tells you it is a 180-day process, then pushes it for another 90 days. Why did we not start with a 270-day deadline so that everyone is prepared? The whole process is so complex,” says an irate PE fund investor.

Others blame the frequent amendments to the law – such as barring promoters from the bidding process but leaving loopholes for them to bid – which have compounded the issue of making an informed decision.

That is why some PE funds have tries up with Indian companies that know the way around with creditors and the process. An added advantage is that the operating partner already has experience in running the same business (of course, if promoters were allowed to bid many PE funds could have tie up with them).

However, senior PE fund executives say that this strategy could well change in the second phase of asset sale.

“One idea of the process is to get fresh foreign capital, rather than money from Indian investors who will borrow from the banks again to fund the acquisition.  In the first phase we are bringing in half the capital from abroad, in the second phase we can go up to 100 per cent,” says a PE fund manager who is talking to some international operating companies.

PE investors say they are looking at the long term — at least a seven-year horizon — before they cash out. But critics point out that they are only looking at deals in which creditors are taking drastic haircuts, writing off 50 to 70 per cent of the loan, if not more.

PE funds deny this. For instance, for Monnet, AION-JSW agreed to give Rs 2 billion more up front as well as increase the banks’ stake in the company from 9 to 18 per cent, despite being a solo bidder.

Also PE players point out that the write-off (which is based on what is paid upfront) does not account for the upside. “We think banks will be able to recover 100 per cent of their loan after they write off 50 per cent.  If you combine upfront cash with potential value of equity, which could go up five to ten times from its current zero value, there is no reason banks won’t be able to recover their loans,” says a PE executive. That is, they say, one key reason the COC is focusing on examining bidders’ background and ability to turn around the company. Mega-bids like that of ArcelorMittal for Essar Steel, JSW and Tatas for Bhushan, Vedanta in Electrosteel are examples of this approach.

Ultimately, everything comes down to the efficiency of the process. As a senior executive in a US-based PE investor pointed out, the Insolvency Act in that country was passed in 1979 and has gone through 200 amendments. It took over 25 deals before the law stabilised. In India, where not even a single deal has gone through a final resolution, it is clearly early days.