Five directors of Maruti Suzuki, including the managing director, will see a pay cut, subsequent to Japanese parent Suzuki Motor Corporation admitting to management flaws (at the latter entity) on the issue of faulty mileage testing.

Kenichi Ayukawa, managing director and chief executive officer, Maruti Suzuki India (MSIL), who also serves as senior managing officer at the parent company, will see a 50 per cent cut in bonus for 2015 and a 10 per cent cut in monthly compensation for three months, after next month.

Of the eight directors (excluding independent ones) at MSIL, five hold important positions at SMC. Osamu Suzuki’s (parent company’s chairman) son, Toshihiro Suzuki, who beside being the representative director and president of SMC is also a director at MSIL, will see a 30 per cent reduction in compensation for six months after July.

Two other directors, Toshiaki Hasuike (joint MD) and Kinji Saito, will see a 10 per cent reduction in compensation for three months starting August, as both serve as managing officers at SMC.

Suzuki, who stepped down on Wednesday over the mileage testing scandal as the CEO of SMC, will continue as director at MSIL. However, Suzuki will take a pay cut of 40 per cent for six months, after next month. Bonus pay for financial year 2015 will not be given for all representative directors, including him.

The pay cuts announced on Wednesday pertain to remunerations from SMC. Remunerations from MSIL will not be affected by this. “This issue has no impact on MSIL,” went an e-mailed reply from a Maruti Suzuki spokesperson.

Osamu Suzuki has been a regular to MSIL’s board meetings and annual general meetings. He has also spearheaded Suzuki Motor’s effort in building a new factory in Gujarat, despite strong reservations from investors and analysts. SMC is Japan's fourth largest car maker. Its India subsidiary has a market share of slightly over 48 per cent, making it the largest passenger vehicle manufacturer in this country. 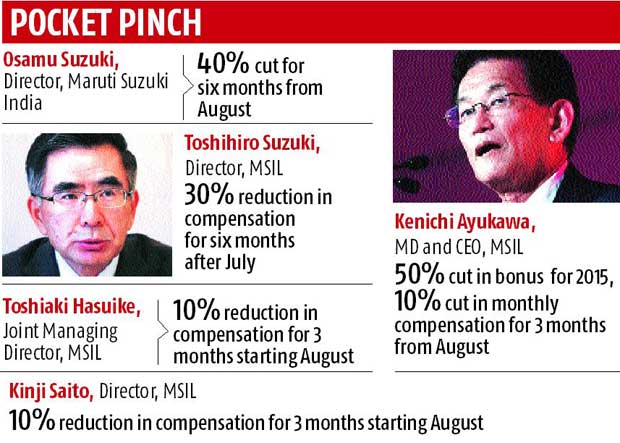