Past investments to weigh on new Tata Sons chairman The biggest challenge for the Tata group would be to overcome the burden of legacy. On paper Tatas are India’s largest and most diversified conglomerate. But scratch beneath the surface and cracks began to appear.

A group with nearly two-dozen listed and an equal number of unlisted firms — quite a few of them industry leaders — is hugely dependent on the profits and cash flow from their two crown jewels to manage the show at Bombay House — Tata Consultancy Services (TCS) and Jaguar Land Rover, which Tata Motors acquired in 2008.


The dependency on these two companies reached an unprecedented level during the 45 months’ tenure of Cyrus, but the seeds were sown during the tenure of Ratan Tata.


The group companies were in a hurry to establish a global footprint regardless of the immediate financial cost. The overarching idea as enunciated by then Chairman Ratan Tata was to derisk India’s biggest private sector conglomerate from concentration of capital in a single market — India. The venture was largely funded through debt with the combined debt of the group’s 18 companies ballooning ten times during the period from around Rs 14,000 crore (around $3.5 billion) in FY03 to Rs 1.34 lakh crore ($33.5 billion at the then exchange rate) by the end of FY09.


The group was betting on the fast rising cash flow from TCS and the expected profits from the newly acquired assets to pay off these new liabilities.


But for the exception of Tata Motors’ acquisition of JLR, none of the foreign ventures lived up to expectations and became a financial burden on the respective companies as the world economy fell in a recession post 2008 global financial crisis.


The global operations of the four big Tata companies — Tata Steel, Tata Chemicals, Indian Hotels and Tata Global Beverages, collectively reported net loss of Rs 8,264 crore in FY16. Collectively, these companies have now lost money in six out of last seven years and their future outlook remains uncertain given the economic challenges in EU, where the group has the maximum exposure.


The foreign ventures of these four companies reported combined negative net worth of around Rs 40,000 crore at the end of last fiscal. The latter largely represents the accumulated losses of the overseas ventures. In all these companies had lost Rs 41,750 crore overseas in the last seven years.


The pain for Tata companies was exacerbated by the fact that while they derisked themselves from India, they were now over-exposed to the UK and EU, which suffered the biggest demand decline post 2008 Lehman Crisis. And unlike India, these economies are still to recover to the pre-Lehman crisis high.


Another problem was that most of the foreign assets were bought at a time when valuations were at the top — between 2006 and 2008. For example, in 2007 Indian Hotels has acquired 11.5 per cent stake in Orient-Express Hotels (now Belmond Ltd) for $247 million. After nearly a decade, the equivalent stake is worth $178 million, forcing the company to take a haircut in its investment.


Back home, the group’s global sojourn had a negative impact on the domestic businesses of the various group companies either due to lack of management focus or capital moving away from India to foreign ventures. For example, Tata Motors lost market share across categories in the last eight-nine years and is now hopelessly depended on JLR to stay profitable. Analysts attribute it to its failure to launch new products for nearly five years as its resources were tied up in turning around Nano, besides JLR which was losing money in its early years after the acquisition.


The group’s telecom venture is bleeding as the group failed to make a case for itself with customers losing revenue market share. Looking back, divesting Idea Cellular, now country’s third largest mobile operator, where Tata Sons held 48 per cent stake in favour of launching CDMA operations under Tata Indicom brand turned out to be a financial disaster.


The plate is full for the new chairman. The group’s future depends mostly on turning around the billions of dollars invested in global venture in the pre-2008 period more than anything else. 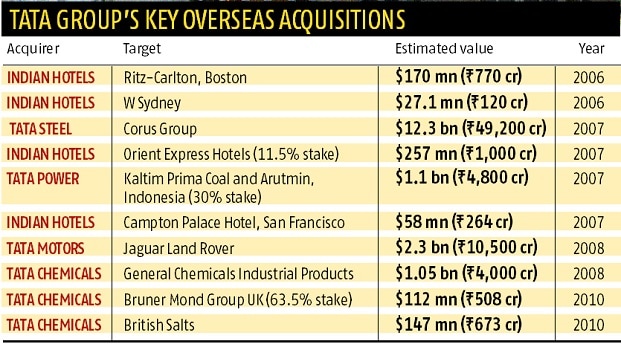