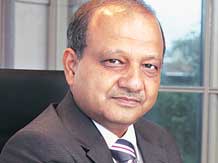 Volvo AB, set to surpass Daimler to become the world's largest maker of heavy trucks after acquiring stake in Dongfeng Commercial Vehicles, is looking to induct Eicher as the fifth brand in its global portfolio. The move could be aimed at increasing penetration in emerging markets.

In the international market, Volvo currently sells commercial vehicles under the Volvo, Renault Trucks, UD Trucks and Mack brands. The company, however, does not have a fuel-efficient mass market global brand to tap into developing markets. With Europe and North America projected to post near-flat growth this year, at 230,000 and 250,000 units, respectively, commercial vehicle makers globally are increasingly banking on emerging markets to boost sales.

VECV Chief Executive Officer Vinod Aggarwal says: "The Eicher brand is known for value and fuel efficiency. We are upgrading our entire product range in collaboration with Volvo. These vehicles will be introduced by the end of this year and exported to markets in South Africa and Southeast Asia, leveraging Volvo's distribution network, over the next two years."

VECV sells commercial vehicles mostly in Bangladesh, Nepal and Sri Lanka, using the company's (not Volvo's) distributors. Last year, VECV exported 2,501 trucks and buses, which accounted for around four per cent of its overall sales. "The ratio of exports in our total sales can go up. We need to develop more country-specific products to make inroads into other markets. Over the next four to five years, we expect exports to contribute 12-15 per cent to our overall volumes," Aggarwal says. VECV's potential to grow international business is considerable, given the markets in Indonesia and South Africa are estimated at about 1,25,000 and 40,000 units, respectively.

Additionally, the Volvo group and EML are investing to set up an engine manufacturing facility in Pithampur, Madhya Pradesh. The facility would be a global hub for Volvo's medium-duty automotive engines.

Says Aggarwal: "We are preparing to supply around 30,000 engines from India to meet European requirements. Besides, engines from the Indian facility will also be supplied to Asian countries such as Thailand and China."

The Euro-VI-compliant diesel base engines would be supplied to Volvo Europe and the same platform would be adapted to Euro-III and -IV engine technologies to meet the requirements of VECV and the Volvo group for Asian markets.

Since the joint venture was formed in 2008, VECV has invested Rs 1,300 crore in India. Till 2015, the company plans to infuse another Rs 1,200 crore in setting up the engine manufacturing unit and a bus body-building facility, besides developing new products and expanding capacity 45 per cent to 8,000 units a month.