The country’s passenger vehicle sales (consisting of cars, vans and utility vehicles) grew by about seven per cent in August, helped largely by an increase in volumes of Maruti Suzuki and Hyundai. Honda and Mahindra & Mahindra (M&M) reported declines, while sales of Toyota and Tata Motors grew in the low single digits.

The largest player, Maruti, saw domestic sales grow 8.6 per cent in August, helped by sales of the new S-Cross and demand for cars in the mini- and mid-size segments. It sold about 4,500 units of the S-Cross, launched in the first week of August.


ALSO READ: Auto sales shift to slow lane as rural demand falls
In August, Hyundai crossed monthly sales of 40,000 for the first time in its 17-year history in India.

Helped by the new sports utility vehicle, Creta, launched in July, and demand for the Elitei20 and i20Active, the company posted sales grew 20 per cent.

“August is usually a lean month for vehicle sales. The growth of 20 per cent gives us confidence of stronger growth in the months to come. We should be able to grow in the high double-digits for the whole year,” said Rakesh Srivastava, senior vice-president and division head (sales and marketing), Hyundai. The company sold 7,473 Cretas in August, up from 6,783 in July. 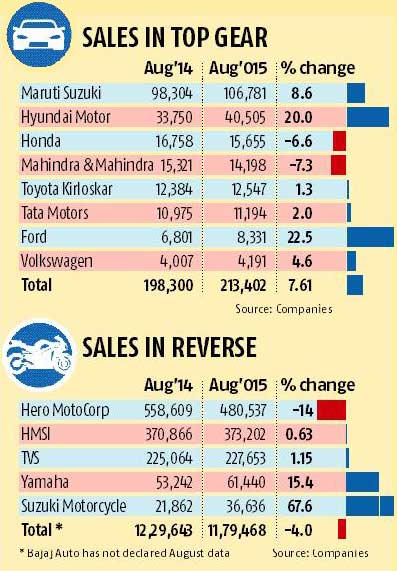 New launches have not worked for every player. Honda, which launched the new Jazz in early July, saw its August sales decline about six per cent. Against 6,676 units of Jazz sold in July, Honda sold 5,404 units in August.

Tata Motors reported a two per cent growth in sale of passenger vehicles. While passenger cars grew 19 per cent in August, sales of utility vehicles slipped 50 per cent and pulled down overall growth.

“There is a concern as the industry’s growth has not picked up the way we expected,” said Mayank Pareek, head of the passenger vehicle business unit at Tata Motors.

M&M remained in the negative zone in August as well. Its passenger vehicle volume declined about seven per cent.

“We are witnessing a fragmented recovery in auto sales. We are hopeful that the upcoming festive season will provide a much needed fillip to the industry,” said Pravin Shah, president and chief executive (automotive), M&M.

Toyota, which has not launched a new model this year, saw its volumes grow by one per cent in August. Volkswagen’s sales grew by 4.6 per cent to 4,191 units. After several months of declines, in August, Ford posted a 22.5 per cent jump in domestic sales, driven by the Figo Aspire, launched in early August.

“The current market is driven by new launches that appears key to growth in this environment. We expect the current growth trajectory to continue on account of festive demand in coming months,” said Amit Kaushik, country manager at Jato Dynamics, an automotive research and intelligence firm.