Sale of passenger vehicles (cars, vans and utility vehicles) grew by 4.6 per cent in September against the same month last year, helped by an increase in sales from Maruti Suzuki, Hyundai and Honda, which launched new products in recent months. Mahindra & Mahindra (M&M) continued to decline, reporting a dip of seven per cent even after launching the TUV300 in early September.

Companies, however, remain hopeful that the recent interest rate cut and festive purchase will support demand in October and November.

Maruti Suzuki, the country’s largest in the segment, reported a 6.8 per cent growth in domestic volumes, helped by sales of the Ciaz and S-Cross (launched in early August). On Thursday, Maruti Suzuki’s stock, which touched a record high of Rs 4,762.90 on Wednesday, closed at Rs 4,579.85, down 2.3 per cent from the previous day.

Hyundai, the country’s second-largest player, posted its best-ever monthly domestic sales in September. Sales increased by 21.3 per cent to 42,505 units, helped largely by the Creta, the sports utility vehicle it launched in July. The company sold 7,256 units of the Creta in September. 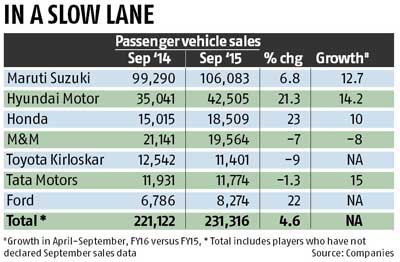 “We believe that a lower interest rate and expectations of a good kharif crop can help the industry grow by 15-20 per cent in the festive months of October and September,” said Rakesh Rakesh Srivastava, senior vice-president (sales and marketing). Interestingly, Hyundai sold an additional 7,464 vehicles in September 2015, against last year same month, while Maruti added 6,793 units.

Ford reported a 22 per cent jump in domestic sales in September, helped by launch of its Figo Aspire. Last week, the company launched the new Figo. But new launches have not worked for some. M&M, which was betting on the TUV300 to grow sales, reported a seven per cent decline in September.

Pravin Shah, president and chief executive (automotive), said, “While the automobile industry has witnessed a slow and fragmented recovery, the recent interest rate reduction is bound to infuse optimism. If the majority of the rate cut is passed on to customers by the lending institutions, it will bring back the momentum in auto sales especially during the upcoming festival season.”