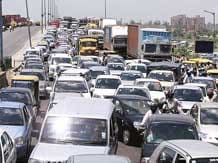 Passenger vehicle (PV) sales in the domestic market declined for the first time in 13 years during 2013-14 (ended March 31), a drop of 6.05 per cent, despite the cuts in excise duty announced by the government in the interim budget.

Sales in the PV segment (utility vehicles and vans, excluding those of cars and sedans) had previously declined in 2000-2001, by 5.9 per cent. High interest rates, rising fuel prices and uncertain economic conditions are held to have sharply depressed demand for both PVs and commercial vehicles (CVs). Manufacturers cut output in FY14 by around five per cent and 16 per cent, respectively in each of the two segments.

Vikram Kirloskar, president, Society of Indian Automobile Manufacturers (Siam), said, “Last year was one of the most difficult for the industry. The business environment was tough due to low growth of the economy, high interest rates, fuel prices and low sentiments.”

He added the decline in sales had hit jobs in the industry, mainly of temporary and contractual employees. “We have not done a calculation of how many job were lost but I personally feel that across the entire value chain in the automobile industry, from raw material suppliers to dealerships, there could be 100,000-150,000 job losses,” he said. 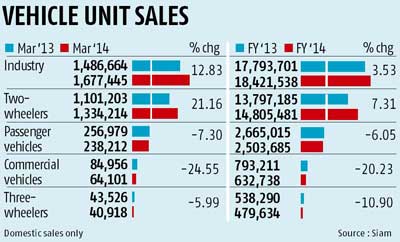 Vishnu Mathur, director-general of Siam, said: “The CV segment has seen a sales decline for over two years. The stalling of infrastructure development projects, ban in mining activities and overall slowdown in the economy has sharply affected demand. It will recover very gradually.”

In the current financial year, Kirloskar said the industry was “hoping for a moderate growth or at least not to be in negative territory”, provided the new government left excise duty rates unchanged.

Abdul Majeed, automobile expert and partner, PriceWaterhouseCoopers, said: “The economy is expected to make a comeback after the much-needed push some of the policy reforms are expected to get in the next one year. The sector is expected to bounce back to its growth momentum, either in the last quarter of 2014 or most probably by the first quarter of 2015.”