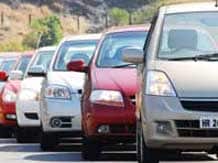 Passenger vehicle sales in the domestic market continued to sputter in May, with high financing costs, an increase in fuel prices and sluggish economic activity keeping customers away from showrooms. During the month, eight of the country’s leading automobile makers together sold 1,83,468 units, a nine per cent decline compared with 2,01,533 units in May 2012.

Industry volumes were dragged down by Maruti Suzuki, which registered domestic sales of 77,821 units, a 13 per cent fall against the year-ago period. The company, which increased its market share in the last financial year, riding on the success of Swift, DZire and Ertiga, saw volumes slide across segments. While sales in the premium hatchback category (Swift, Ritz and Estilo) fell 29.4 per cent to 17,147 units, DZire sales declined 2.5 per cent to 17,265 units. Sales in the utility vehicles space (Gypsy and Ertiga), which were buoyant through most of the last financial year despite the downturn in the industry, fell a whopping 44.3 per cent to 4,307 units, against 7,734 units in May 2012.

Sumit Sawhney, executive director (marketing & sales), Renault India, said, “The macroeconomic numbers are not encouraging. In the first four months of the calendar year, the industry declined 12 per cent. In fact, passenger car sales have contracted 18 per cent. Inflation and fuel prices remain high, resulting in lower levels of disposable income with consumers. This is affecting sales.”

South Korean automobile major Hyundai Motor India’s sales grew a meagre 0.3 per cent to 32,102 units. Rakesh Srivastava, senior vice-president (sales and marketing), Hyundai Motor India, said, “Hyundai has maintained positive growth and will gain share in a market that is at the near-bottom level and is expected to move into positive growth in the coming months, as the demand for petrol cars is improving.”

P Balendran, vice-president, General Motors India, said, “We were able to register 40 per cent growth only because of the good response to our newly launched vehicles — Chevrolet SAIL and Chevrolet Enjoy. Economic activities have almost come to a standstill and the market remains completely depressed due to negative sentiment and structural bottlenecks.”