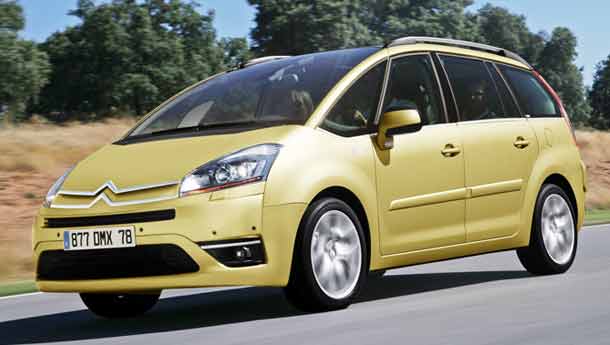 We have featured most of the cars from the Paris Motor Show, including the concepts. This time around, we have some of the machines that we have not covered - the surprises of the show, as the case may be. And some, ahem, interesting ones too. Here we go...

Quoi?  Citroen C4 Picasso
Pour quoi? Because it’s the first ‘visiospace’, that’s why
Et? The C4 Picasso, younger sibling to the Xsara Picasso, is an all-new compact MPV based on the C4, and its biggest highlight is light. In other words, this ‘visiospace’ vehicle has humongous glass areas to allow natural light to filter inside. Of course, it’s also highly versatile and allows seven people to travel in decent levels of comfort or, of course, take a whole lotta stuff inside. The C4 Picasso comes with four engine options at launch: two petrol – 127 bhp 1.8 and 143 bhp 2.0 – and two diesels – 110 bhp 1.6 and 138 bhp 2.0. No, there’s nothing Cubist about it.

Quoi?  Dacia Logan MCV
Pour quoi? Because it will be on our roads too!
ET? Did you know that the Logan has clocked sales of over 300,000 units since its launch in Europe two years back? Amazing, no? Well, now they have introduced at Paris the Logan MCV, which stands for Multi Convivial Vehicle. Seriously. Anyway, the MCV closely follows the Steppe concept shown last year and the production version comes with huge interior space and versatility. It can actually fit seven passengers. This grown-up Logan estate shares the same drivetrain as that of the sedan – three petrol engines (75 bhp/11.5 kgm 1400cc, 90 bhp/13 kgm 1600cc and 105 bhp/15 kgm 1600cc 16v) – and the 70 bhp/16.4 kgm 1500cc turbodiesel. The Logan MCV is decently speced out in terms of safety features and of course, it will wear a value-for-money price tag. So will it make it to India? The Logan MCV is definite launch material, and expect it to be introduced in our country
by 2008.

Quoi?  Ford Iosis X Concept
Pour quoi? Because it’s a new interpretation of kinetic design
Et? After receiving rave reviews for the Iosis concept at Frankfurt last year, Ford has gone overboard with their new ‘kinetic’ design language, this time applied to a AWD crossover concept. The Iosis X is all curves, lines and weird shapes inside-out, which Ford says is just a design exercise. It’s strictly not meant for production. Good thing. (Pause) Er, actually not, a crossover from Ford is due in Europe in 18 months. But Ford still swears this concept has nothing to do with it. Yeah, right.

Quoi?  Toyota Auris Space Concept
Pour quoi?  Because it’s from Toyota. Toyota is big. This car will sell in the millions
Et?   The Yaris’ elder brother, the Auris Space Concept, is a massive hatchback - it’s bigger than the Ford Fusion we have here. Which means loads of room inside for people and luggage. But what’s important is that the Auris concept is about as conceptual as the Fusion - meaning it’s as real as production cars get. The Auris will play in the crowded European C-segment, where Toyota already has the Corolla. So does that mean the Auris is the new Corolla? Why not?

Quoi?  Audi R8
Pour quoi? Because it can do 100 kph in 4.6 seconds and 301 kph
Et? Remember the Audi Le Mans Quattro concept car? This is the production version of it. It’s called the R8 in honour of the car of the same name which took honours at the 24-hour endurance race a full five times. Audi’s first ever mid-engined car, the R8 is powered by the 420 bhp 4200cc V8 FSI motor, and gets Quattro as well as the Audi Space Frame aluminium body. Two transmission options are on offer - a six-speed manual or the Audi R tronic sequential shifter. What’s next Audi?The R10 TDI?

Quoi?  Opel Antara
Pour quoi?The crossover segment is growing and Opel desperately needs the sales
Et? Europe is loving crossovers, and so the Opel GTC crossover concept that debuted last year in Frankfurt is now here in Paris as the production version called the Antara. Using unibody construction and intelligent 4WD, the Antara promises car-like handling with the size and confidence that comes from an SUV– sigh, like all crossovers. Anyway, the Antara will initially be available with a 226 bhp 3.2-litre V6, 150 bhp and 126 bhp 2.0-litre turbodiesels and a 140 bhp 2.4-litre gasoline inline-four.

Quoi?  The Lada 1119
Pour quoi? Because it’s generally fun to see what these ex-Soviets are up to
Et? The exquisitely named Lada 1119 hatchback was introduced in the Russian market only this July. A car that will not win any design awards (except maybe in North Korea), the 1119 is powered by a 1400cc 16-valve four-cylinder engine with 90 bhp on tap. Lada also had on display the 1119 Sport that matches international Group N specs. This more powerful unit makes about 110 bhp and 14.4 kgm and the car will kickstart the single-class Lada Kalina Cup circuit races. All the best.

Quoi?  Renault Koleos Concept
Pour quoi? Because it’s Renault’s first ever significant 4WD crossover
Et? Yup, the Koleos means that Renault is getting into a new segment altogether. The Koleos soft-roader crossover concept heralds a new machine that the French major will be launching in 2008. It has been developed by the Renault-Nissan Alliance with assistance from Samsung Motors in Korea, which Renault owns. The Koleos is powered by a 180 bhp four-cylinder 2000cc 16-valve turbodiesel.

Quoi?  Kia Cee’d
Pour quoi?Because it genuinely looks good, and is a significant model for Kia
Et? The Cee’d is an indication that Kia means business in Europe. It has hired a bunch of people from European carmakers, including a hotshot German designer, and it shows. Fighting in the highly competitive C-segment, the Cee’d will be launched with five engines in diesel and petrol, the most powerful in each category being 140 bhp 2000cc four-cylinder units. Comprehensively packaged and with a record-breaking warranty behind it, the Cee’d is seductive indeed. But that’s not all. A hot three-door version, the Pro_Cee’d is also due to be introduced next year.

Quoi?  Skoda Joyster Design Study
Pour quoi? Because it’s Simply Clever by half
Et? The Joyster is an example of Skoda Auto’s motto, Simply Clever. Well, they have been, haven’t they? Based on the Fabia,the Joyster is a roomy yet compact three-door car/MPV/whatchamacallit and could be another path which Skoda will take to follow its design language. The rear seats split to form some kind of a bench you can sit and chat on with your friends, while it has mood-lighting on the inside. Roomster. Joyster. Next is Monster.

Quoi?  Dodge Avenger Concept
Pour quoi? An American Werewolf In Paris
Et? DaimlerChrysler thinks Americana will sell in Europe, no matter what those prissy Britishers say. Which is true actually, if you see the number of Chrysler 300Cs on the roads in Paris. So maybe the Dodge Avenger could be the next example of American muscle for European streets. Classic muscle car looks with a long hood and a short rear deck, the Avenger will surprisingly get a 2000cc turbodiesel. Um, what was that about American muscle?

Quoi?  Ssangyong Actyon
Pour quoi? Have you ever seen a face like that?
Et? Since the response to the odious Rodius was overwhelming, Ssangyong made something even more hideous (hey, a rhyme’s forming up here!). And that, ladies and gentlemen, is the Actyon. Another Ssangyong SSUV (ha!), the Actyon is powered by a 140 bhp 2000cc four-cylinder turbodiesel and a whole lot of chutzpah. By the way, the name, if you haven’t figured, comes from Action and Young. They have a nose for these things, don’t they?

Quoi? Ford Mondeo
Pour quoi? Because it’s the all-new Mondeo, stupid
Et? Well, this is how the new Ford Mondeo is going to look when it’ll be launched in Europe early next year. Surprisingly, Ford unveiled it in a station wagon format instead of the saloon. The new ‘kinetic’ look of the Mondeo makes it quite smashing to look at indeed, reportedly good enough to star in the next Bond movie, Casino Royale... but in hatchback form!

Quoi?  GREAT WALL HOVER CUV
Pour quoi? Because it’s Chinese. Hey, you love Chinese food, don’t you?
Et? Great Wall is China’s biggest privately owned carmaker - we didn’t know these existed. Anyway, the Hover is a CUV (Cport Utility Vehicle?) that has been comprehensively engineered, they swear. It has been crash-tested and has a full lineup of active and safety features and 4WD too. And it’s also loaded with other features as well. Two Mitsubishi engines feature in the options list, a 2400cc petrol and a 2800cc diesel. Well, it looks like the Chinese are really trying to make cars, but not on their Engrish. Their literature about the car was hiralious!