On a Gullwing and a prayer 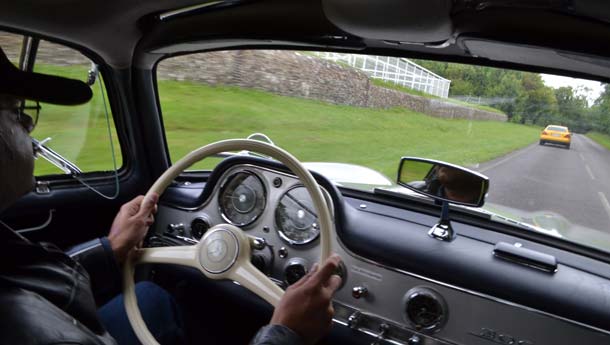 Now I can die happy. On June 30, 2012, I drove the peerless, the iconic, the legendary Mercedes-Benz 300 SL, famously known as the Gullwing. It’s the one model that for me exemplifies all that is great about the automotive world and the people who work in it. The fire to drive it burnt deep within. I have famously promised to retire from this field after I’ve driven it. Unfortunately I don’t have any retirement plans yet, but I have at least started thinking about it…

I started work at Business Standard officially on July 1, 1997. On the last day of my completing 15 years, I drove the car of my dreams. Yes, exactly 15 years. I wouldn’t have realised it till Ruman figured it out. You may think it was a wonderful coincidence but I don’t think so - I think it was fated, it was written beforehand. But not so easily. On the day I was supposed to drive it, God played some nasty hide-and-seek with me, taking me to great heights of expectations, suddenly dropping me from those dizzying heights and elevating me up again. I suspect He wanted me to be grateful to him so that I could cross an important entry off my bucket list.

Now, this blog is not about what the 300 SL is like to drive (it’s exactly what I expected it to be like and then some) but that’s for a future issue of BSM. This blog is more of a behind-the-scenes story of how it happened, which won’t go in the magazine but I just wanted to get it all out.

Days before I was to visit the Goodwood Festival of Speed in the UK and attend the test-drive of the new A-Class, the email from M-B India had a list of cars that we could drive from Brooklands to Goodwood. Though each of the 38 cars from their heritage fleet would have been awesome to drive, buried halfway down the list was the one I wanted most. Innocuously enough, it read 'MB 300 SL Coupe 1955'. Instantly I made my calls, booking it for the drive. It was done! I would be indeed driving my pinup car. Still I know that good things don't happen too easily; you should earn them. So I kept my expectations quite low.

Cut to the evening of June 29, venue Mercedes-Benz Centre, Brooklands. The event was the world premiere of the new CLS Shooting Break but my eyes were not on this radical-looking estate car rather on the car on display near the reception area – a black Gullwing. Breathtaking. I just couldn't take my eyes off it, hoping against hope that I would indeed be driving one the next day. Later in the evening, a reconfirmation with the organiser indeed assured me. My co-driver would be Shapur Kotwal of Autocar India.

A sleepless night later, we landed up at the Brooklands Hotel to pick up the car. There it was, a silver one, with the wings up, ready to take off. Waitaminnit, there were two Japanese journalists already in it, ready to leave! I simply stood in front of the car in protest, unwilling to let them get away. Should have known. The Japanese PR was hovering around the organiser last night and he would have connived to get his team into the car. Why this car? Why now? Why, why, why? I was livid and so was Shapur - he almost did a rugby tackle on the Japanese PR. Protests followed vehemently. I never felt so angry before.

Not just me, but the entire bunch of Indian journalists was angry. They were angry for me. So they also joined the protests. Meanwhile the two Japanese journos vamoosed, and as the most gorgeous car butt on Earth disappeared from my sight, my emotions had sunk somewhere near my shoe soles. A little voice inside me said 'give it up, it was too good to be true.' I had given up...

...but not the others. All of them gave many pieces of their minds to the Germans and the Indian PR also spoke to the organisers. All of us had landed on the organisers like a tonne of bricks. Truce. Get to Goodwood and they might just squeeze in some time for you in the car, I was told. So instead of a 50s SL, cruel fate ensured I got a late 90s SL to drive there.

We arrived at Goodwood. The other classic Mercs had already reached the place where we were supposed to drop off the cars. Some were already being loaded onto huge car carriers. But I glimpsed a hint of silver in a corner. The Gullwing! It was waiting for us. Before I knew it, my bum was warming the classic Tartan seats and off I went! Yes. Yes. Yes.

I drove it and drove it the way it's meant to be driven. After it was over, the impact of it all sunk. It was an emotional void. Hiding your emotions and your tears is perhaps the second-most toughest thing to do; the first of course is climbing Mt Everest. Before I knew it, the SL was loaded in the truck and all belted up, to make its long journey back to the Mercedes-Benz museum in Stuttgart.

Yes, indeed I can die a happy man.