Ola to raise $1 billion to fend off Uber 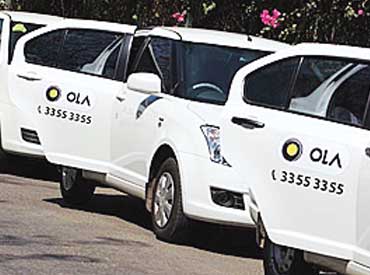 ANI Technologies, the company that owns India’s largest taxi aggregator, Ola, is in talks to raise nearly $1 billion (Rs 6,700 crore) in fresh funding to compete with global rival Uber, which has a war chest for India, 'the only market that remains open globally.

Ola is expected to close the round before the end of July, said sources privy to the development on condition of anonymity. Existing investors SoftBank, Sequoia Capital and DST Global are likely to participate in the round. Two new US investors are expected to take part in the funding, but their names could not be independently confirmed.

Ola’s global collaborator and investor Didi will also take part in the round, potentially bringing India into the competition map between Google and Apple. In May, Apple invested $1 billion in Didi, which dominates the Chinese market, while Uber raised funds in 2013 from Google Ventures, the investment arm of Google.

Ola did not respond to a mail seeking comments sent on June 8.

Ola, Didi, Indonesian taxi aggregator Grabtaxi and Lyft, the laggard in the US market, are part of a global alliance that allows users to use their home app in other countries.

The alliance stitched by Softbank, the common investor in these firms, shares best practices and resources to combat Uber, which dominates the app-based taxi aggregator market in the US. 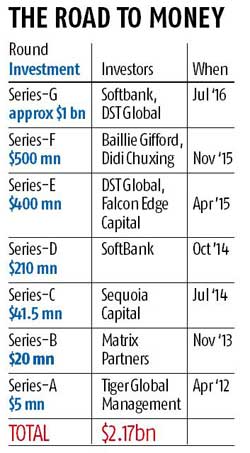 Ola’s fresh fund-raising effort is seen as an attempt to stock ammunition against Uber, which plans to spend in India a substantial portion of the $3.5 billion it raised from Saudi Arabia’s Public Investment Fund.

In the algorithm-driven taxi-hailing app business, the service that has the maximum number of drivers and users will emerge the ultimate winner. Both Ola and Uber model follow a business model that has space for a sole winner.

Uber, during its three-year presence in India, has been able to gain half of the market share by offering incentives to drivers to make more trips while reducing fares to prod customers to use its platform more frequently.

Uber India President Amit Jain claimed recently that the company had a 50 per cent market share in the country in terms of trips completed.

India’s taxi aggregator market was in February 2016 estimated to be $1.2 billion in gross business value by Redseer Consulting.

So far, the two companies have made a combined investment of $2.25 billion (approx Rs 15,000 crore) in India, a country that has a weak transport infrastructure due to lack of public investment. This is spurring both firms to splurge money to get more drivers and users on their platforms.  The increased investment comes at a time when the taxi aggregator business is coming under increased scrutiny by the government.

Karnataka became the first state to introduce rules to regulate players like Uber and Ola. It has asked them to cap pricing, which effectively ends surge pricing practices. Uber has moved court, describing the Karnataka rules as unconstitutional. The next hearing in the case will be on June 20.