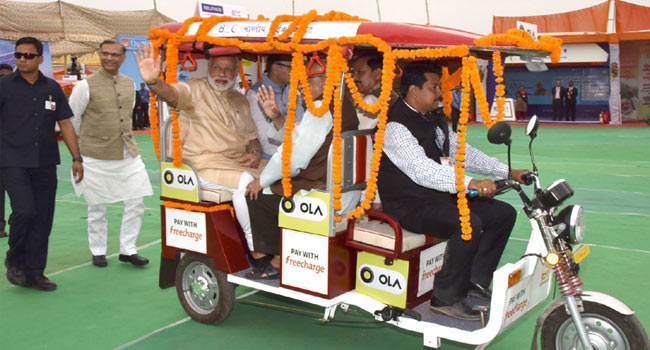 The E-rickshaws were launched under Prime Minister Narendra Modi's Stand-Up India initiative, which is focussed on promoting entrepreneurship. The rickshaws will be deployed across Delhi, Gurgaon, Noida, Faridabad and Ghaziabad in collaboration with the NGO Bhartiya Micro Credit (BMC), which aids financial needs of e-rickshaw drivers.

"The e-rickshaws will be given to SC/ST and women entrepreneurs," the Prime Minister said in his address, after flagging of the E-rickshaws.

The scheme was launched after the government made it mandatory for e-rickshaws to follow certain regulations, including being confined to certain roads in the capital.

A total of 5,100 e-rickshaws were flagged off at an event held in Noida. This will be further scaled up in the coming months to more small towns and Tier 3 cities across the country.

Ola will make the service available to existing cycle rickshaw pullers and run skill development centres with BMC to train these rickshaw pullers on using the Ola app. Ola will be earning 10% commission on e-rickshaw rides booked through its mobile app.

To foster digital payments for e-rickshaw, FreeCharge has partnered with BMC, which will help the customer to pay for the ride digitally.

Anand Subramanian, senior director of marketing communication at Ola said that about 65% of the country’s population resides in small towns and the launch of e-rickshaw will help them address the same opportunity in the market. E-rickshaws will service the short distance mobility needs of Tier II and Tier III markets. In September 2015, Ola had achieved over 1 million booking requests daily.