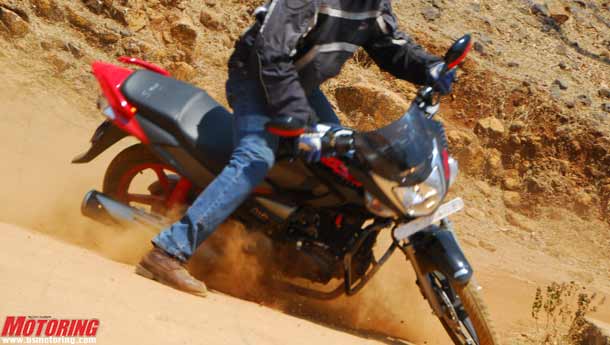 It’s a horrible feeling, falling off a bike. I’ve done it a few times (not on purpose, naturally) over the years, on various bikes and in different circumstances, and each time I’ve hated it. The first time it happened was on (or is it off?) my CD100 SS, when I keeled over in an attempt to avoid making mincemeat of an old lady who suddenly ran across the road. Not long after that, I went down mid-corner when I encountered a patch of sand, placed there just for the purpose. Later on, on a friend’s CBZ, I nearly busted my knee when I fell off, trying to avoid an idiot who darted out of a lane. My RD has thrown me off thrice, each time resulting in more damage to the bike than to me; if you own an RD, you will know that this is a very bad thing indeed, especially for your wallet. Each time, I’ve had that sickening feeling in the pit of my stomach, the one that tells you that you’re going down, no matter what, and each time I’ve told myself ‘Never again!’. Naturally, it’s never worked.

A couple of weeks ago, I parted company with a bike yet again, on the way to the 150cc shootout in the April issue of BSM. It was very early in the morning and still quite dark, and in moving from the left side of a road to the right, I didn’t notice until it was too late that the two sides were delineated by a shoulder the size of the Great Wall. Again, I knew instantly that I was going to make intimate contact with the tarmac, but this time, things happened differently, in super-slow motion. As soon as I realized what was going to happen, I told myself that I needed to stay relaxed, that I needed to avoid getting run over by someone else and that I needed to get off the road immediately after I had fallen. When I hit the road, I landed with my weight squarely on my right shoulder and slid forward, but I managed to turn myself around mid-slide in order to see if any vehicles were behind me. When I saw that the coast was clear, I stood straight up and walked over to the side of the road to recover. All this happened in about 5 seconds, but I can remember each millisecond as clear as day. The bike took some minor damage to the exhaust, and I wrenched my shoulder pretty comprehensively (my arm’s still in a sling), but I think that all this falling off has taught me how to keep a reasonably cool head in the event of a spill. Like I said, never again – until the next time, of course.