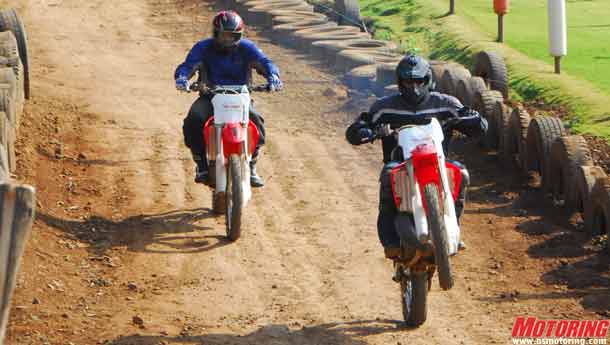 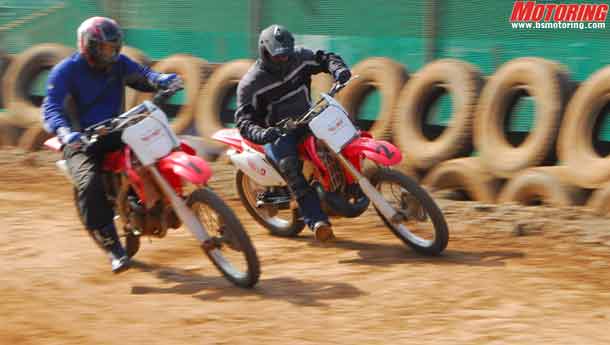 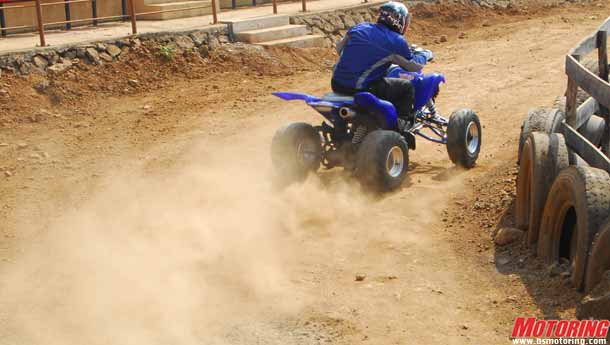 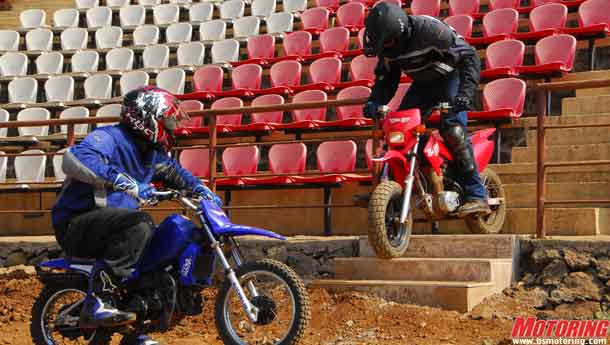 We’re a dirty bunch, the motorcyclists at least. Our jeans are washing-machine virgins and some of us are not on talking terms with the shaving razor fraternity. If you happen to be driving by our office, I suggest you don’t drop in anytime around lunch time. That is when our lunch table resembles a ravaged third-world country (no names, okay?) and we, its citizens. Viewed in this light, it is not surprising that we take to dirt, slush and slime every now and then for some more motoring madness. In our Slush Fest specials, we’ve gone off-roading on two wheels and four and on one occassion, fourteen (Actros!). This time, we’ve upped it to sixteen. Well, sort of.

An oval? That’s it?’ is what Kartik and I told ourselves on our first sighting of the track. A 350-metre track, with an incline/decline on either straight and two dead slow corners, was to be our playfield for the day. The most obvious choice for a recce was a helicopter, but the little Honda is all we had. ‘So be it,’ said I and stumbled over the seat, hit my knee against the handlebar and moments later, slipped my foot off the kick-starter, landing on a grunge metal footpeg. If the lady in charge wasn’t so hot, I’d have whimpered and hopped off into the woods, weeping. Talk about a good start to the day.

The XR 100 Motard is about as light as half an Activa. And to think of it, it took all 90 kilos of me around the track and even yumped repeatedly. Respect, considering the fact that 6 year-olds and loonies ride it in the US/EU. A four stroke, 100cc motor that sounds borderline Dio actually feels powerful thanks to the weight and size. Four gears and a happy clutch saw us off to cute wheelies. It’s a scaled-down motard, so you get proper motardability, but we wished we were about three feet tall. Explains the target audience, then. More than the engine output, it’s the dimensions than can catch you out. Simply put, aggressive handling will see you eat dust. The XR is small, on motard tyres and that hot girl is still around. Keep it low.

It’s like a happy Labrador – will playfully growl, but has forgotten his biting trousers in the shrubs.

The PW 80 is the brat of the two. If read in a straight line, its specifications are longer than its wheelbase. But there’s more to it than just size. It’s a two-stroke, 80cc engine, for screaming out loud. No clutch lever (Jive!), but you have three gears, about 7-odd horses and brilliant suspension. Oh, and it’s lighter than light itself. That shows in the way it flies. About ten laps down, I was hauled into the pits for, well, having too much fun. Truth be told, the chaps were worried my 90 kilos would break the front forks. Fair enough. Telepathic wheelies (look at Kartik in his almost divine pose) and big grins are standard equipment.

Continuing with the dog theme, it’s like a pesky Lhasa Apso. Will bark, bark and then some, but one belly rub will do the trick.

This is where the tyrewall bit comes in. Truth be told, we kept the ATVs waiting till the end of the day. We had to get accustomed to the track (it’s only an oval, but still) and the power delivery variations of the four motorcycles and ATVs with their thumb-lever throttles would have confused the life out of us poor souls. We were right. When the moment of truth arrived, one of us got his brakes mixed up and flipped over to one side (Kyle! - Kartik). Someone also went into a tyrewall (Ruman! - Kartik) while someone else (Me! - Kartik) was busy powersliding the Raptor.

Starting with the Polaris 90 was a good idea. 90cc doesn’t sound like much, but ATVs are tricky, okay? If you saw us from Google Earth, you’d see three blokes (yes, Kyle joined in too) in deep conversation with tyrewalls at various sections of the track. The Polaris is big enough to accomodate your average BSM-er with great comfort. However, it did fall short on power, especially so on the incline/yump spot. Full throttle was the keyword and disobedience would land us into a stinky horse shed. An 89cc, 4-stroke motor powers the Polaris via a chain-driven CVT. In the real world, it means you have a reliable ATV that can get you out of most sticky situations without much of a workout. It was the smallest ATV out there and we wanted to see how it faired against the biggest, the Raptor. This is not a fairytale ending folks. Big displacement wins. You can all go home now.

It’s like going hunting with mates and returning with lilies on the dash. Fun lawnmower, in two words.

‘Superbike!’ I shouted in my helmet. It really is like one, except that it is awkwardly large and has four brawny tyres jutting out at four corners. The Raptor is as comprehensive as ATVs get. I’m told it’s almost a benchmark in the world of ATVs, but we won’t say it until we’ve verified the claim in the name of journalism. Generating all the wheelspin, thrust and Mumbai’s electricity supply (okay, not the last bit) is a 686cc, 4-stroke, 4-valve, fuel-injected motor. Five foot-operated gears (with reverse) and generous use of the throttle can see you off to a top speed of 150 kph. Kartik was a natural on the ATVs. While I was struggling on the Polaris, our man lapped me several times, stopped for tea, drove to Goa and back... you get the drift! Yes you do, with every little thumb movement. The way around a corner was so insane, it was funny. Turn handlebar right into the face of the corner, and drift for as long as you can thumb the throttle. Last heard, Kartik was trying something similar with the Punto’s indicator stalk.

At full throttle and slight handlebar tilt, it’s like a wild elephant who’s stayed up at the bar too long.

When riding in dirt, swing the other way. No, not what you’re thinking, you dirty mind. It’s funny but simple, how riding in dirt contrasts street riding. In the latter, you hang off on the inside of the corner, getting your knee as close to the tarmac as you can. Try doing the same on dirt and you’ll end up getting both knees down at one go. Bad idea. Instead, you shift to the outside and stick a leg out – and make sure your leg doesn’t get caught out by the surface. Stiff hands don’t help and light gloves do. We learnt the hard way.

Motocross bikes are anyway dynamically insane – tall, wafer-thin and light. Add a 13,500 rpm two-stroke engine to the party and you have the motorcycle equivalent of jumping off a cliff. Which, in fact, you can. To get used to the dimensions, I first rode out on the CRF 250R (the CR is a two-stroker) which is the nicer sibling. The CR range is available in 50cc to 450cc versions and what we have here is, as the name suggests, the 250. It has all the characteristics of a big-ish single, in that there’s an infuriated thump and a ham-fisted throttle. Competition motorcycles don’t claim official power output figures, but in a general state of tune, the CRF produces roughly 50 bhp. Trust me, 50 bhp on a tall, wafer-thin motorcycle with knobblies is as intimidating as it can get for street riders like us. It’s got grunt through the rev range, never bogging down. It makes quick work of bumps and yumps and given the chance, will do so for hours on end – like we did! The CRF is incredibly capable, but it’s just not a two-stroker. If you have to live with one of the two, the CRF seems like the wiser pick. It’s friendlier, more fuel efficient (sacrilege!) and being a four-stroker, won’t have reliability issues. On the track, the CRF seemed invincible. Power, torque, traction, it’s all there when you need it. Loads of it.

It’s like a size-zero Enfield on a tankful of Red Bull.

The CR, on the other hand, is like a punch to your senses. You delicately handle the quick throttle, lose eardrums over the godawful/godawesome expansion chamber and feel the powerband coming into existence from the moment you look at it. For every blip of the throttle you get a big wheelie. Try that in first gear and you can backflip while parked. Having warmed up, I just about got the hang of the throttle, which is how the picture on the previous page happened. What you don’t see is my heart popping out of that borrowed jacket. Small mercies. The CR is unbelievable. The throttle wants to murder you, the suspension and brakes bail you out. 2-stroke, 250cc single and about 60-odd bhp is the motorcycle equivalent of chilli soup with sulphuric acid thrown in for good measure. The CR, apart from the fact that it is a competition motorcycle (not road-legal, in casual speak), is not an everyday motorcycle. Every millimetre of throttle movement means a significant rise in velocity. Why aren’t all motorcycles like this one?

After rejecting about seven metaphors for libel law concerns, I think you can take a look at this one. It’s like having a murderer for a best friend. You’ll go to thrilling heights, but handle it wrong, and it’ll have to kill you. Bang! We’d like to thank Della Adventure for letting us have a field day. If you want to get yourself dirty, visit their website www.dellaadventure.com and pick from one of 86 activities they have on offer