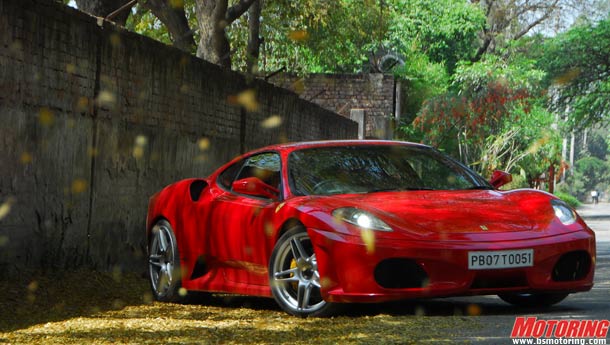 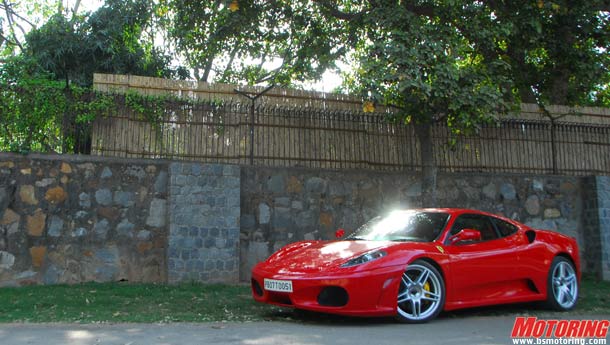 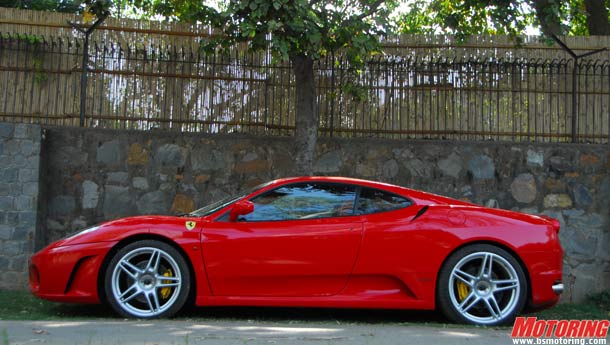 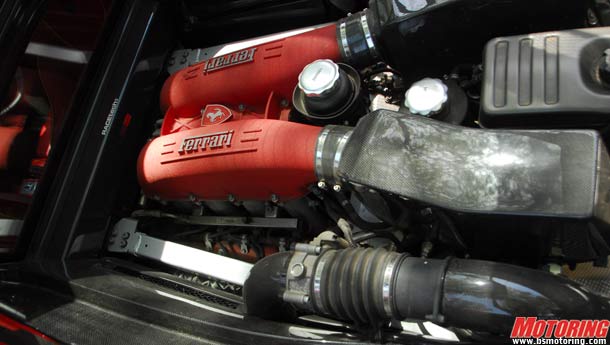 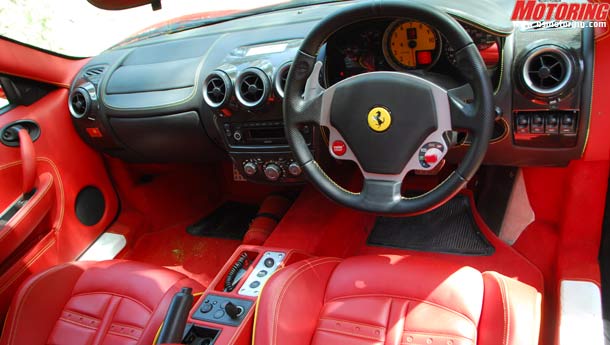 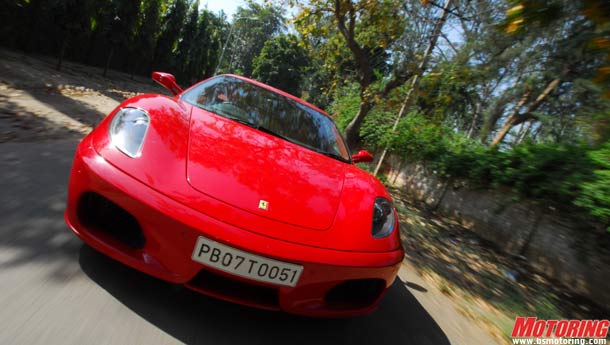 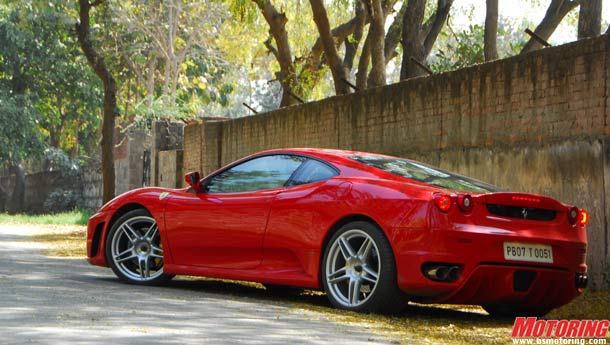 In 2.2 seconds, the human heart has beaten nearly three times. In the same time the hummingbird would flap its wings nearly 200 times, and if it is trying to woo its partner, a staggering 450 times. In the automotive world, the parallels are few and far between. A top fuel dragster would have crossed 100 kph in one-thirds of that time while the Bugatti Veyron knocks off the century mark in 2.5 seconds. Standing starts are a great way of bragging at the pub and sometimes heated arguments follow when the lager starts to knock people's senses out.

As for me, I have felt that figure, in a rather violent kickdown of a gearbox, the manettino switch selected to ‘Race’ and the exhaust note at hyper-frequency. These were at passing speeds from 80 to 120 kph, a real world measure of what your car can do when the chips are down. Don’t know whether to laugh or cry.

Special is the word to describe this Novitec Rosso F430. Special because it is (ahem) the quickest, noisiest and most powerful Ferrari not just in India but in the region by far! Three years ago, I managed to snag a drive in one in Germany, home to Novitec and trust me when I tell you, the shivers down my spine made a prolific return. Yet, this time it was different. Driving one in India is akin to making a hotline call to the gatekeepers of the netherworld. In the same breath I can't imagine why a successful businessman like Samir Thapar would want to go through the whole hog for a country where it's hard to go as quick as it's capable of. But then prudence and 720 bhp never fit in the same sentence.

Supercars and Samir Thapar seem to be old friends. Having wheeled and owned several of them, he hit a wall. His stock F430 just didn't feel quick anymore and it started a craving for something quicker. For most Suzuki Swift owners, an air-filter here, an iridium spark plug there and a loud can from South East Asia is the best way to tackle 'boredom'; not for Mr Thapar. A call to Racetech, Novitec's Indian representatives later, two superchargers, intercoolers and associated knick-knacks arrived. Ten days of love and labour passed and the F430 emerged from Racetech's Bangalore workshop, ready to eat Murcielagos for breakfast and spit out 599 GTB remains. The only thing that can give it a serious whacking is the 599 GTO, which also sounds like the gods woke Beethoven back from the dead to finish the tenth symphony.

Don't for a second though think that the supercharged Novitec Rosso F430 is a 'mute spectator' as I re-realised it one Sunday morning in New Delhi. Passing through a quiet back-road I dabbled with the manettino and shifted from Normal to Sport. The exhaust baffles opened with a shriek, a quick downshift (if you think 150 milliseconds is er... slow) and the imaginary neighbourhood was running down the road, ready to lynch me if that made them happy. So I tried to make a quick getaway and then stomped hard on the throttle. Wheelspin in first, wheel hop and some more spin in second and a mild protest from the front wheels in third as I was screaming for my life.

It threatened to throw me out and I was heading down the path of martyrdom. It should have felt familiar and yet it felt like I was not prepared for it. Just like the 997-911 Turbo, the twin supercharged F430 accelerates from 0-100 kph in 3.5 seconds, but where the 911 Turbo will just let its rear tyres squeal and do everything in its powers to reduce torque steer, this one will just simultaneously knock at your temples with a three-tonne hammer and draw a spear into your backside. It's so savage that it can hit 200 kph in just 10 seconds and it will scream down the runway in a high pitched drone that will ring in your ears many nights after you've driven it. Sure the Agera and Veyron can do it much quicker, but you wouldn't probably be able to recollect the seven and a half moments they take to do the same many winters later in the same fashion as this one.

It doesn't take long before realisation dawns that you've long gone into the depths of naughtiness and there's no turning back. It accelerates so hard that your view appears smudged. At 200 kph you are covering a football field at the rate of... you guessed it right, 2.2 seconds. The brilliance lies in the fact that it just doesn't let up, doesn't feel like you've crossed the point where the power and torque curves meet - it's just relentless in its quest for 300 kph and if Samir had opted for the optional taller gearing, he would have seen 348 kph at some point in his life. It will keep hunting for the 8500 rpm redline like any normal supercar, but its top-end performance takes it in the realm of hypercars that are priced at least 6-7 times more. Since the full 73 kgm of twist arrives at 6300 rpm, don't for a moment think that it is particularly high strung - in fact most of that torque is available far lower down the rev range and it certainly is more impressive than the 47 kgm that a standard F430 delivers at 5250 rpm. The sweet spot lies somewhere past 6500 rpm and downshifting to get into that zone makes it just as much fun as seeing the school bully being walloped by the little guy in class. It's from this point, all the way to the redline, that the car behaves violently. There is such rapidity with which it hits the redline that you just keep downshifting for the heck of it.

Go past all those hyper velocities and hit a nice twisty section - this car will just beguile you. The steering feels just as responsive as on a stock car and the slightly twitchy nature of the car isn't lost on you. There is still a sense of fluidity in the way the F430 responds to driver inputs that I can't seem to find from more modern, dual-clutch equipped supercars with their electro-namby-pamby steerings and what not. It still feels alive in a way that reminds you what Ferraris of yore truly were. With the wider Michelin P-Zeros at the front and rear, there is enough grip on offer to keep you grinning all day, of course there is always the CST option on the manettino to kill all the electronic nannying and kick up the bass level. The ride quality is typically Ferrari, slightly stiff for our kind of roads and the nose is always too low for anything higher than an Indian serpent.

When you are done impressing your girlfriends and mates and you are done playing manettino conductor for the day, switch back to normal and it will behave like a Porsche - practical and docile. It goes back to sounding like a regular Ferrari and not the one that would give Bianca Castafiore a complex. Samir even didn't opt for the Novitec body kit, choosing only to upgrade his wheels to 20-inch single bolt numbers and the usual 235 section tyres at the front and 325s at the rear while painting the rear diffuser red. No West Asia-spec interior treatment, no huge rear wing and no Scuderia style full length body stripes - it's just a plain ol' F430 at heart.

Few cars will excite you. Even fewer cars will leave you craving for more. And then there's the one that will leave you addicted. It's a fix that you can't get rid of and no amount of rehab will ever make you want to change your ways. The supercharged Novitec Rosso F430 is just such a stimulant - an intoxicant for some but an elixir of life for many. It doesn't matter if you've driven it once, twice, 282 times or whatever, the feeling going through your blood vessels every single time is the same.

They say familiarity breeds contempt. If this is contempt, then I'm loving it!

We would like to thank CannonBall Club, India's largest supercar club and Racetech India (www.racetech.co.in) for organising the Novitec Rosso F430 supercharged.

Novitec Rosso manufactures kits and tunes all sorts of Ferraris, and their F430 was the first of the lot to crack the 700 bhp barrier. Instead of turbocharging, they opted for superchargers since it meant not opening the engine and it's good for our climate - plus turbocharging best suits manual gearshift equipped cars. The kit itself contains two rotrex superchargers of identical size - one for each bank with boost pressure at 0.48 bar, two twin-core watercooled intercoolers that cool the supercharger oil circuit, a heat insulated manifold, two larger capacity air filters, larger injectors, a new set of lower-pressure cats and stainless steel exhausts make up the important mechanical changes. An engine re-map to suit the new additions as well as carbon fibre engine bay cladding for the superchargers as well as the rear glass cover make the visual changes. Larger 380 mm brakes at the front and rear help improve stopping power for the increased shove on offer. You can also opt for KW coilovers with 40 mm lift capability to raise the nose, a la the Lamborghini Gallardo and a full body kit that was developed in a wind tunnel.