No more scooters from Bajaj 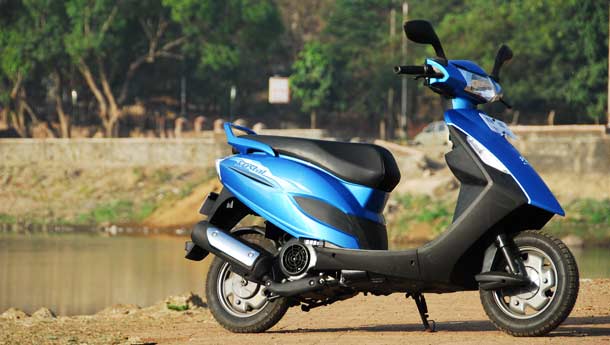 Bajaj Auto, whose name has been synonymous with scooters in India for decades, will stop producing the vehicle in the next three months. The company sells 300 automatic scooters every month under the brand name, Kristal.
The move is part of Bajaj’s new strategy to overtake Honda and become the number one motorcycle manufacturer in the world. It is the second-largest two-wheeler manufacturer in India.

The company also plans to drop the brand “Bajaj” from its three-wheelers in a phased manner and call it just RE (which stands for rear engine). Brand Bajaj would be restricted to only motorcycles.
Interestingly, early this year Bajaj had announced plans to launch a series of scooters to take on Honda, the segment market leader.

“Currently we manufacture the Kristal, our only automatic scooter, in small numbers. It doesn’t make sense to keep production lines running for such low volume models. Production of the Kristal will be stopped by the end of this financial year,” said Rajiv Bajaj, Managing Director of Bajaj Auto, at the launch of Pulsar 135 LS motorcycle today. Giving reasons for withdrawing from scooters, he added: “In order to become a motorcycle specialist and number one in the world, we have to make a sacrifice, of manufacturing both motorcycles and scooters.”

The decision to move away from scooters, according to Bajaj, is pegged on three reasons. One, the company is seeing good profitability in selling strong brands like Pulsar and Discover 100cc motorcycles.

“Our EBITDA margin for the second quarter of this year stands at 22 per cent, which is the highest in the auto industry so far. For the third quarter we hope to do better.” Vaishali Jajoo, analyst at Angel Broking, said margins derived from selling Pulsars were above industry average, at 15 per cent.

Secondly, he thinks the worldwide motorcycle market is growing faster than scooters. “There is enough headroom for growth both in the domestic and the export markets. Currently we manufacture around 50,000 units of Boxers in China, which are sold in the export market.” The Boxer is sold as Platina in India.

Lastly, address the top end with KTM motorcycles. The company has a 31.72 per cent stake in Austrian motorcycle manufacturer KTM, which manufactures motorcycles of 250cc configuration.

“So, we make more money by being focused as motorcycle specialists rather than producing everything and making no money at all like the Chinese manufacturers,” Bajaj added.

Giving reasons for withdrawing the Bajaj brand name from its three-wheelers, Rajiv Bajaj said, “Companies with sharper focus generate more profits. We are adopting the strategy of Toyota, which has separated the passenger vehicle branding from its commercial trucks called Hino.”

The company is putting in all of its resources towards becoming the number one motorcycle manufacturer in the world. Currently it is the top exporter of motorcycles in the country with production facilities in India and China. Every year around 30 million motorcycles are sold. Honda of Japan sells around 7 million units worldwide. This figure includes Hero Honda’s sales in the domestic market, too. Bajaj Auto, which sold around 2 million units last year (and has a manufacturing capacity of 3 million) hopes to ride on the recent success of its Discover 100cc and Pulsar 135cc to double its output.

However, analysts say that to overtake Honda might be difficult as its India operations through Hero Honda are also growing equally fast and, therefore, reducing the gap and overtaking them could be challenging.

In the 1960s, Bajaj Auto got a manufacturing license from Italy’s Piaggio and began manufacturing and selling scooters under the brand name Vespa. In the seventies, when Piaggio refused to renew its license, Bajaj began manufacturing under its own brand, like the Bajaj Chetak, which was an instant success and even witnessed black marketeering with consumers ready to pay a hefty premium to own one.

But with the market moving towards motorcycles, Bajaj stopped production of its bestselling brands like Chetak and Super in 2006 amid plummeting sales. It again entered into scooters, but tentatively, in 2007 by launching the Kristal.