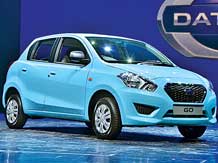 Japan’s second-largest automaker Nissan Motor Company today made the global debut of the compact hatchback Datsun Go – the first vehicle under the resurrected brand Datsun – in a bid to scale up sales in emerging markets.

“Today, we begin new chapter in the history of Nissan. Datsun is back... The car will go on sales early next year in India, followed by Indonesia, Russia and South Africa,” says Carlos Ghosn, president and CEO, Nissan Motor Company. The re-launch of the Datsun brand is part of the company’s strategy to increase sales to 60 per cent of global volumes by 2016 from 40 per cent in 2007.

Datsun Go is the first product Nissan unveiled under the Datsun badge, which it had phased out in 1986. The company unveiled the car today, over six months before its launch in early 2014, to create awareness about the Datsun brand in the country, says a senior executive in the company.

Ghosn adds, “We have a market share of little over 1.2 per cent in India at present. We are looking to take it to 10 per cent in the mid-term. We expect Datsun to play a significant role in this”. The Indian car market had crossed the 3 million mark in 2011 and is expected to be 4 million by 2016.

The Datsun Go, a five door car to be commercially launched next year in India, will be priced below Rs 4 lakh. Datsun Go will be powered by a 1.2 litre engine. Currently, Maruti Suzuki, Hyundai, General Motors and Tata Motors control a lion’s share of the segment below Rs 4 lakh. Car markers such as Honda, Toyota, Renault, Volkswagen, SkodaAuto and Ford have developed segments above this price-point.

Andy Palmer, executive vice-president (global planning and programme management divisions) says, “Nissan stands for cutting edge technology, innovation and excitement. It has a tendency to be price premium. This is not compatible with the goal of Datsun in fulfilling dreams of personal mobility. With Datsun we are making a slightly different promise.”

Datsun will develop its strength in the segment below Rs 4 lakh while Nissan will continue with its plans in the more expensive segment. India is expected to be a major production hub for Datsun. The car would have localisation levels of nearly 100 per cent. “To reach the price levels we are talking about, it has to be locally manufactured in India, Indonesia, Russia. We are not 100 per cent local content, some parts will be passed through other countries but we will be as close to 100 per cent indigenisation levels as possible. The Micra is 94 per cent localised, the Evalia 85 per cent”, Palmer adds.

The Datsun Go was developed majorly in India with inputs from the France and Japan technical centres. Besides India, the Go will be also be seen in Russia, South Africa and other emerging countries.

This is the third brand of Nissan which has Infiniti, a premium car brand. The Micra, its other small car, sells for Rs 3.5 lakh (ex-Delhi showroom) with a 1.2 litre engine. Nissan is looking at trebling its sales outlets in the country to 300 by 2016 to increase the reach of its products.