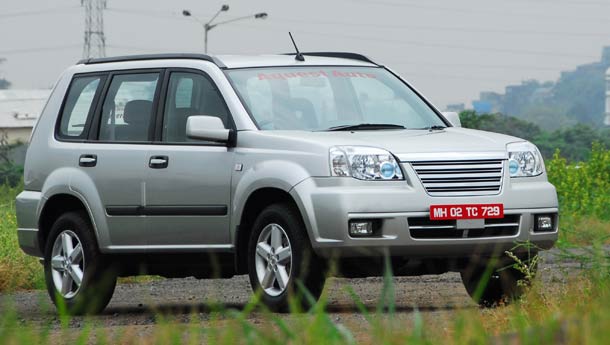 You want to drive the new X-Trail?’ asked Srini, in a tone that implied I had absolutely no choice in the matter. ‘Sure’ I said, and I meant it. I’ve only driven an X-Trail once, during last year’s slush fest where we pitted it against the Ford Endeavour and the Hyundai Tucson, and I was left wanting an extended experience at the wheel. This wasn’t merely because the X-Trail handily whupped the other two during all our mud-plugging; to me, it was the most complete diesel SUV I had ever driven. The way it went, handled and rode was a revelation, and it was with considerable regret that I saw it go back to the Nissan showroom. ‘Actually, it’s not ‘new’. There’s a body kit available now that you can order with the Comfort version; that’s the one you have to drive.’ That put a bit of a dampener on things, but only just – an X-Trail to drive (in this case, a Rs 21.27 lakh X-Pecial) was still something to look forward to.

As it turned out, the big Nissan had already been spoken for by a lucky customer, so any sort of serious driving was out of the question. On to the meat of the matter, then. The X-Pecial body kit (available only with the Comfort model and no, you can’t retrofit one on your old X-Trail) gets you a new four-slat grille, new bumpers, rectangular fog lamps, clear lens tail lights, a chrome-plated exhaust pipe and black plastic garnishing around the door handles. All of these are just fine on paper, but in the flesh? Here’s the thing – I wish I could say that the new grille and tail-lamps give the already handsome X-Trail some extra character, but they end up making it look too flashy. The X-Pecial takes on a semi-concept appearance, which doesn’t quite jell with its off-road cred. There aren’t any problems with quality, mind you; all the bits are absolutely top-notch, although at Rs 1.6 lakh they had better be. It’s just that the overall design integrity is compromised somewhat, which is a pity. Then again, this kit is a direct import from Japan, where oddball design elements are all the rage.

Other than this slight blip, the X-Trail remains the pleasure it’s always been – great to drive, great to sit in and great to go off-roading with. And, on second thought, there are sure to be buyers who want their X-Trail to look ‘different’ from the rest; this one’s just what their doctor ordered.