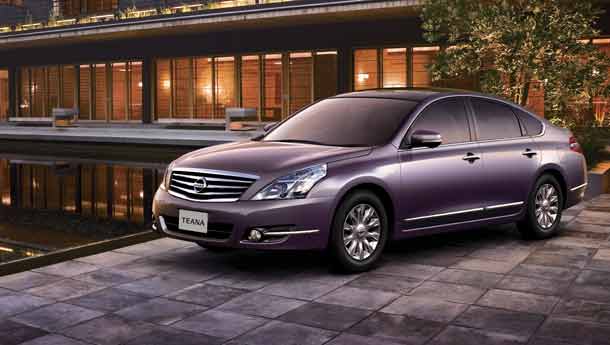 Nissan are pulling out all stops to get their Indian plans on track. While a state-of-the-art plant is being constructed out of Chennai, that isn't stopping their small, yet significant CBU effort.

The new X-Trail and Teana are the first of the lot. Essentially newer generation cars with new engines, revised chassis and interiors and yet they aren't an entire generation up.

The Teana's 2.3-litre V6 now gets replaced with a 2.5-litre engine unit that now produces 180 bhp and a 23.2 kgm of torque. Other changes include new tapering headlamps, larger chrome grille, revised bumpers and tail lamps as well as new alloy wheels. On the inside a new dashboard with the instrument cluster located right behind the steering wheel forms the major highlight. Other changes include the adoption of an Ottoman chair for the front passenger seat that mimics airline business class seats, the adoption of sunroofs for the both the front and rear seats in the top-end version as well as a multi-speaker Bose surround system and vented seats at the rear.

The X-Trail on the other hand gets a new 2.0-litre common rail turbodiesel engine, instead of the 2.2-litre unit. Power is now up to 150 bhp from 135 bhp, while peak torque has increased marginally to 32.7 kgm. Like the Teana, the X-Trail gets a revised instrument cluster layout (behind the steering wheel), a new centre console, hill descent control and hold assist on the premium variant among others. Exterior changes include new larger bug-eyed head lamps, V-shaped grille, cleaner bumper design, revised tail lamps and alloy wheels. Nissan claims that the X-Trail is based on an all-new chassis that has improved dynamics considerably. Read elsewhere on this site for a comprehensive X-Trail drive in Japan.

The prices of the cars, ex-showroom New Delhi are as under:

Meanwhile the company has hinted that the Murano premium SUV and 370Z roadster will complete its range of four CBUs that have been planned for an Indian launch.