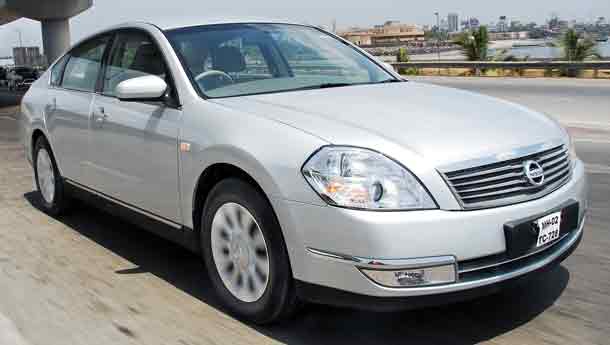 In the world of automobiles, some decisions are easy to make. So easy that it makes the automotive journalist redundant. For example, if you want a large sedan and don't want to spend premium money (read BMW, Mercedes-Benz levels), then you'll buy an Accord or a Camry. Those who want to monopolise the rear seat will be happy with the four-cylinder version of the Honda or the Toyota, while those who would like to drive may prefer the V6-powered Accord. Is it as simple as that? You wish.

Bringing in the affordable luxury end of the market will be the Hyundai Sonata Embera, which is no less an automobile the way it is built or the way it moves. Then there is the diesel twist in the form of the Skoda Superb. And now, Nissan has entered the market with the Teana which, like the Camry, is imported into India and hence costs over Rs 20 lakh to buy. But unlike the Toyota, the Teana comes with a V6 powerplant that justifies its price tag a great deal. If you're wondering why, do know that the Nissan V6 under the hood of the Teana is one of the best V6 engines ever built in this whole world. A short drive just as we were sending this issue of BSM to press was proof enough.

The said V6 wakes up to a hushed idle and the automatic box (straightforward stuff here, no manual shifting antics possible) sends the power to the front wheels with a slight hint of hesitation. The reason is simple – the Teana is not a lightweight automobile at almost two tonnes (gross weight), and that means 170 bhp at 6000 rpm and 22.8 kgm of torque at 4400 rpm feels only adequate to move the mass. But we shouldn't be passing a verdict here, since we are yet to subject the car to a proper road test – so it is only safe to say that the acceleration did not feel any special. But what we can tell you even before a road test is the fact that this is simply the smoothest V6 in India today and that includes engines from some very big names. Floor the pedal and the engine note will make you think that the cylinder walls are coated with a layer of  butter. It is that smooth.

So there, the theme is luxury and smoothness. We were warned that the test car that we were driving came straight out of ARAI duty, but it felt absolutely well put together. The exterior design of the Teana falls between that of the Camry and the Accord and there is enough chrome (grilles, runners, bumper liners and so on) to make a bling-impact. The car is best seen on profile with a very coupe-ish greenhouse and a sporty stance. For India, the Teana will run on 16-inch alloys with 205/65R Bridgestone rubber. The thick rubber adds to the ground clearance of the car but without spoiling the overall stance. The LED rear lamps are a nice touch indeed.

Nissan has gracefully interpreted the Mercedes theme of running a console-length wooden panel (matte finish and beautiful). The sun-visor for the instruments and the multiple display screen is a classy touch too. The Teana comes equipped with a built-in music system and dual-zone airconditioning as standard fitment. The seats are the best in class with electric adjust for the front driver (eight-way) and passenger (four-way). The rear bench can seat three but two will be treated to serious business class comfort levels. The rear panels of the front seats are scooped out to liberate more knee-room at the back. From the inside, the Teana feels much more special than any of  its competition. Those who are buying for rear seat comfort are going to love it.

On the move, the Teana is an extremely neutral car. As mentioned earlier, the impetus is on smoothness and refinement. The steering is sharp and ride quality pleasant. The multi-link rear end suspension ensures that the car can be driven hard and corners attacked – a 350Z will be better off in this regard, still. We had to drive through a series of potholes to get the car out of shape – albeit momentarily. The gearbox kicks back in time for those quick overtaking manoeuvres and the car cruises effortlessly at highway speeds. Discs all round with ABS and EBD do a brilliant job of deceleration.

In short, the Nissan Teana is an extremely well-built, refined D-segment entry that needs to be considered if you are in the market for one. Sure, the price tag may twitch a few eyebrows and the fact that Nissan has only five dealers in India as of now is not very reassuring either. That said, Aquest Auto, the Mumbai dealer for Nissan has sold a whopping thirty cars already and we are still in the launch month.  It is really difficult to position this car into any niche – but if being different is important to you, then you have found your next D-segment car.

It might be small, but the engine is one of the smoothest and has won the American engine awards for 13 years in a row. You should rather complain about the 2000cc V10 Connaught

2. Can it hold against the Camry?

Have to admit, the Teana is quite good and the big Toyota might have something to worry about.

3. What about service. Aren't there few Nissan dealerships for now?

It's all changing. There will be more dealerships by the end of the year even in smaller metros. Service support shouldn't be an issue.