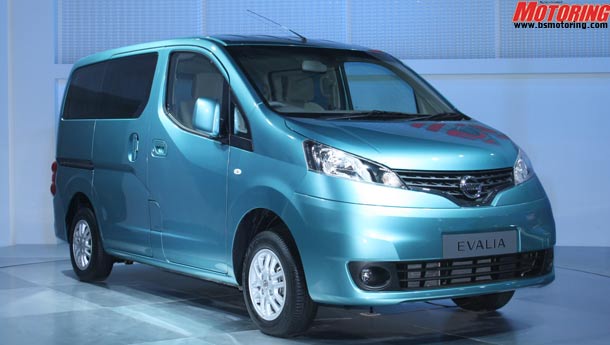 Despite slowing demand, Japan’s second-largest automotive company, Nissan Motor, is gearing up to launch a variety of passenger cars, vans and commercial vehicles in India in the coming months, including those through alliances.

Though it has a substantial presence in other markets, Nissan is the 10th-largest car maker in India and is trying hard for a bigger share here. It has a little over one per cent market share in the passenger vehicle market.

The company is looking to launch five new models, to be built at its factory in Chennai which it owns in partnership with Renault, stated chief executive Carlos Ghosn in the annual report. This is part of its global plan of delivering a new vehicle every six weeks, on average, during the next six years.

Evalia, a premium multi-purpose vehicle (MPV) that could be priced upwards of Rs 9 lakh, will be launched in India before December. After having launched the Micra compact hatchback and the Sunny sedan using a common platform, Nissan is presently working on at least one more product that would be using the same platform and to be retailed under its own brand.

It aims to strengthen the Nissan brand before launching a series of low-cost small car models under its other brand, Datsun, two years later. This new brand will be used for tapping newer segments, such as those in the price bracket of Rs 2-4 lakh.

Nissan presently has a mix of products — a small car (Micra), sedans (Sunny and Teana), a sports utility vehicle (X-Trail) and a sports car (370Z) — through local production and import. About 70 per cent of the production is exported.

“We are broadening our range of models for both the Nissan and Infiniti brands and eliminating product overlaps. More dedicated vehicles for key growth markets, such as China, Brazil, Russia, India and Indonesia, will allow personal mobility to become more accessible to those consumers who need it,” added Ghosn.

Meanwhile, Nissan’s joint venture with Chennai-based truck and bus maker, Ashok Leyland, will be taken forward to include more variants of the existing Dost, joint production of a MPV in Nissan’s plant and the launch of a new light commercial vehicle (LCV).

The LCV Dost, targeted at the one-tonne segment dominated by Tata Motors’ Ace, is the first vehicle developed and produced under the JV company. Following favourable demand growth for it, both companies are planning to add variants in the coming period. The slightly bigger LCV, the F24, called Cabstar by Nissan but Partner by Ashok Leyland, will be the other product to be launched next year. This product, more than six tonnes, is the intermediate commercial vehicle from the JV.

The multi-seater vehicle Stile from Ashok Leyland, developed on the same platform used by Evalia, will be produced at the Renault Nissan plant in Chennai for launch in 2013. This vehicle will be of a commercial nature, offered at a more affordable price point, similar to those of the Mahindra Xylo or Chevrolet Tavera.

V Sumantran, vice-chairman, Ashok Leyland, said at an interview given to an in-house media centre of Nissan, “I think we have already got the first three products lined up. The first one (Dost) has been launched and we already have many ideas for very good variants to come off that platform. The Evalia is close to the end of its development cycle, so it’s out in production very shortly. And, work is very well underway for the F24 as well. I think we feel confident so far that whatever the two companies have defined as a business plan looks within reach.”