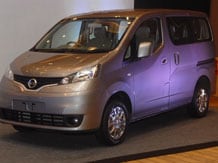 A weaker than expected demand and an anticipated lack in excitement levels during the festive period will most likely witness Japanese car company Nissan falling well short of its targets for the year.

The Indian subsidiary of the Japanese giant which had set a target of selling 1,00,000 in the domestic market by the end of the financial year has so far clocked sales of only 12,343 units during the first six months of the year.

On the sidelines of the launching a refreshed Evalia, Kenichiro Yomura, president, Nissan India Operations, said, "Its a little difficult to achieve that target of 1,00,000 units." Nissan's dismal performance so far this year may result in the company failing to meet at least 50% of the earlier announced target.

The company which in July launched the face-lifted version of the Micra along with its low-cost version called Micra Active, has seen a sales erosion of 43% during the first half of the this year as compared to 21,781 units sold in the same period last year.

Its newly launched sports utility vehicle Terrano has been well received in the market with sales of 3,000 units every month. Based on incremental volumes of the Terrano and the refreshed Evalia Nissan hopes to close the year nearer to the earlier declared sales target.

"We were optimistic when we announced the target in April but the market has not performed the way we expected it to. We will try to do our best", stated Yomura while declining to talk about revised targets. Presently the company eight models on offer in India - two hatchbacks, two sedans, two SUVs, an MPV and a sports car.

Nissan is also unsure of meeting its export target of 100,000 units for the year too. The company exports four cars out of every five produced in India. In the first six months of the year Nissan exported 49,653 units, a gain of 8% over the same period last year.

When asked whether Nissan will meet the export target Yomura said, "We do not know because exports depends on sister concerns (operating overseas)".

Nissan today introduced the face-lifted Evalia, a multi-seater van, at Rs 8.78 lakh (ex-showroom, Delhi). Having launched only a year ago the Evalia underwent a face-lift in the shortest period ever for a Nissan model. Usually models undergo a refreshment after spending at least three years in the market.

As part of the changes Nissan introduced sliding Euro windows on the middle row, sliding/reclining captain seats in the middle row and alloy wheels in the XV variant, 2-din audio system, rear wiper, rear defogger to name a few. A roof mounted AC blower unit for the second and third row, will be fitted by the dealer.

Despite the sharp dip in demand the company, however, has not made any change to its set market share target under the Nissan brand which stands at 5% by financial year 2016. At present its share stands at 1.02%, according to data provided by the Society of Indian Automobile Manufacturers. An additional 5% share is also targeted from its sister brand Datsun, which will see the commercial launch next year.