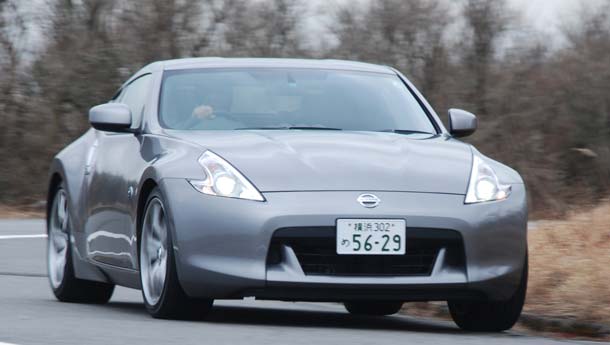 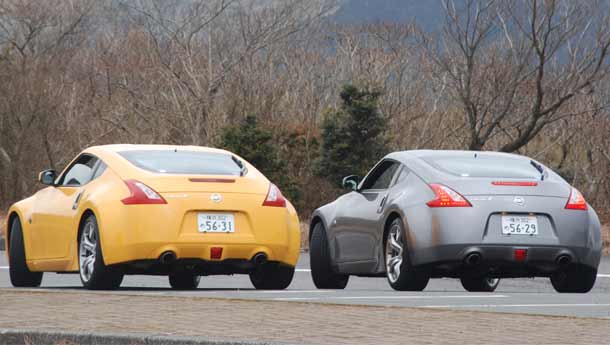 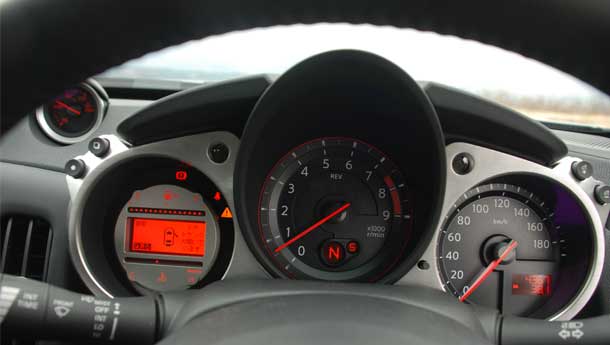 No machine has ever done it to me. Not even a Ferrari or one in a state of hyper-tune. But this one did. It wasn’t supposed to... or at least I didn’t expect it to. Blood gushed from the rear of my head to the front. My cheeks and forehead swelled and what I experienced was what fighter pilots would call negative-G. It only lasted a fraction of a second, but was enough to imprint the moment somewhere in my cerebral cortex for life. Just moments ago, I had aggressively attacked a tight left hander in Nissan’s new 370Z at some pretty high speeds, before I went through the dip with wheels in the air followed by a sharp climb that forced my body to go through that whole experience. I was new to the hills of Odawara, about 100 kilometres outside Tokyo – the perfect testing ground for what Nissan call their sixth generation Z.

It’s a car Mr K would probably be proud of. The man who conceived the Z more than 50 years ago, Yutaka Katayama, must be aware of the fact that the Z is in the safe hands of men like Shinjiro Yukawa – though I don’t know whether the legendary Mr K is still around or driving the wheels off a 2017 Z prototype in paradise. The soft-spoken Japanese who currently heads Z product development is humble when he talks about how the new Z was conceived and what they did to bring their new Fairlady up to steam. Then as the product presentation slide moves on to the one that talks about benchmarks, his face lightens up. The words Porsche and Cayman work like triggers for the nattily dressed Yukawa, who thinks Nissan have finally cracked the deep mystery that surrounds the best handling car in the world.It’s designed to be what the 350Z wasn’t exactly – a hardcore driver’s car. Past the blood gushing experience, the eyes took a while to set themselves back in place before the rev-counter and speedo needles started to rise in unison. Everything that Yukawa so painstakingly explained the previous night at the presentation table started to make sense. It was, as if my brain started to tick all the boxes of an imaginary 120-point chart. This Z was starting to make all the right noises.

But it wasn’t always like that. The first pictures of the new Z seemed to suggest it was nothing more than a 350Z reskin exercise. As easy as it was to dismiss the 280Z and 260Z as mere change of attire (if you ignore the 5 mph bumpers and detuned engines that is) over the 240Z, the 370Z felt exactly in the same vein. But it isn’t. How does making the new Z lighter by over 110 kilos compared to its predecessor sound? The 370Z has been designed specifically to deliver a sporty driving experience and that had to be done by attacking the chassis itself. The wheelbase has been shortened by 100 mm over the 350 to make it more chuckable. The front overhang is now longer by 30 mm, but that is to allow the car a more slippery shape. The overall length is down from the 350Z by about 75 mm to make the car more intimate with the driver. Though Nissan never stopped their raft of changes at this point.   Take the headlamps, for instance. They are sharper, angular and more aggressive. Aggression can shift_more Zs than lineage and Nissan understand that. The grille is deeper, the ridges on the bonnet more prominent and the tapering bumper completes the reptilian look. The profile feels tauter and apart from the headlamp casing, there’s not much to distinguish between the predecessor and the new-age Mugen (that’s Z for you in Japanese – meaning infinity). The brushstroke of the headlamps now ends at the tail, with the sweeping in tail lamps completing the new look. Though under all those cosmetic changes are a new set of aluminium front and rear fenders as well as the bonnet and tailgate, to put the Z right behind the Cayman’s hindside up a mountain pass.Back then though, I was struggling to get a grip of the 370Z on Odawara’s downhill sections as the convoy of two Zs had to slow down. A lone yellow Toyota estate with lights blazing had just blown past us. We had been warned by Nissan’s PR about the presence of keisatsukan in the area and got off the gas. A run-in with the police was the least we wanted on our passports and the presence of two of Nissan’s newest coupes certainly had the police officer on duty on high alert. After all, Japan’s rich youth are known to burn rubber on the hill sides of mainland Japan and the 350Z has an infamous reputation of sorts. But this lone keisatsukan would have been in for a surprise had he given chase. The new 370Z has 15 per cent better torsional rigidity and newly designed front and rear strut braces. And with new aluminium double wishbones at the front and independent multi-link units at the rear, he’d be totally gobsmacked to notice the 370Z take the cleanest possible line with ease.

We kept at 50 kph, admiring the chirruping birds, the rustling of leaves and nature in general as the 370Zs coasted down, in what had become the longest and most boring drive since my fuel efficiency runs for a cheap hatch at a rival magazine years ago. I could see the curve at the end of the slope, but the lights of the Toyota were still flashing atop the hill. Curve negotiated and flashing lights no longer visible, the tyres lit up like a Guy Fawkes night and we were back to doing what we were at for the last one hour. The animal instincts of the 370Z were back, and this time with renewed ferocity. For the first time, my attention wasn’t distracted by thoughts of wildlife or jailhouses. It was now aimed squarely at the new V6 that was singing tunes under the hood.

The 3.7-litre mill from the Infiniti G37 saloon uses a front mid-mounted position to close the gap on Porsche’s mid-engined layout for the Cayman. But where the Cayman S delivers about 320 bhp from its Boxer-6, this one delivers 332 bhp. Even the G37 produces a tad over 300 bhp, which goes to show this one gets the royal treatment from Nissan R&D. The all-aluminium unit with double overhead camshafts and variable valve tech is as far as Nissan can go with this unit, as far as fiddling with the bore and stroke can go. But it sounds brilliant. Brilliant enough to reverberate off hill faces and enough to cause a smirk on our friendly cop’s face half a valley away. This engine feels like it developed an additional set of biceps and shoulders overnight to keep all the pretty college girls in its arms during prom night. It burbles at 2000 revs and as it ticks over at 4000 revs, you would be hard pressed to find the difference between the audio note of a full-blown V8 and this. It’s only at six grand that the hills start to hear the shriek and the full realisation that it’s a V6 hammers in. As fantastic as it sounds, it moves even more fantastically. The full force of 27.5 kgm of torque wrestled with the 19-inch Yokohamas, but I didn’t feel a thing with all kinds of electronic trickery still switched on. It made me feel invincible and the harder I dived into corners, the better it got. And that’s because I didn’t need to heel-and-toe to maintain momentum.   My friend for the day was Synchro Rev, Nissan’s biggest development find since the GT-R’s transaxle unit. This intuitive unit works like a charm, especially for those who’ve never been successful at this rather tricky driving technique. Available on the manual, Synchro Rev just blips the throttle when you downshift, preparing the gear in advance. Shifting from third to second when straights met curves only made it quicker than my still slow technique. It even works well while dawdling around town when you have to shift from fifth to third and catch a street racer napping. For expert drivers, it can add a fraction to their times and for complete novices, an entry into a hitherto unexplored world. With a short-shifting and precise gearbox like the six-speed manual on the Nissan, Synchro Rev works its magic as the road ahead started to clear up. Downshift from fifth into third – 120, 140, 180, 180, 180.... the speedo needle kept banging at the speed limiter as gear after gear, the tacho kept crossing the magic 7000 rpm figure. For a car that’s capable of hitting the tonne in just  5 seconds, the 370Z comes into its element. And I kept wishing that the road back to Tokyo would be just like the hills of Odawara. Though they were not to be.Thankfully, I had a car change and slipped straight into Z number two, an automatic example, to beat the weariness of Tokyo’s dreaded rush hour evening traffic. It doesn’t feature Nissan’s new dual-clutch system like the GT-R – instead it relies on good old automatic tranny construction techniques. However, it isn’t as bad a unit either – heck, excellent would be more apt here. The seven speed unit with the optional limited slip differential on our test car was as precise an automatic as it would get. Upshifts, downshifts, no shifts... they all seemed to work precisely. It felt like my fingers and the long paddles attached to the steering (not the wheel) were connected by a 3 mbps broadband connection. While going up the gears, it feels extremely smooth, while downshifting a gear doesn’t blip the throttle as much as you would expect. So you move a couple of gears down, prepare the engine to stay in the torque rich mid-range and pin the throttle down. It never felt like it would lag behind a manual 370Z over Nissan’s Hokkaido track by more than a second or two. And Hokkaido is Nissan’s exact replica of Nurburgring and Germany’s autobahns, down to the road surface, signboards and even trees.

The ‘ring however is a different place in a different world. Tokyo is what mattered that day and over the elevated roads leading into the LED lit city of the Far East, all matters came to naught. Japan has always had an answer for anything the world has thrown at it. Whether it was solving the TGV riddle or getting kids across the world hooked to gaming consoles, they always seem to find the right answers. The 370Z then, I’m happy to report, answers many questions. It handles beautifully, the steering is pin-point accurate while the engine is one I want to steal right now. The new Z is better than most of its competition – even the interiors are snug, high quality stuff that the 350 couldn’t pull off. It is one-up on its predecessor, but it may still have some way to go before it topples the Cayman from its mighty position. But there’s no doubt that the new Z is a fantastic attempt by Nissan; the GT-R-like obsession is seen in this car too.Nissan is seriously considering launching the 370Z in India next year. And there are some fantastic roads back home I can think of to have a blast with it. But I will be prepared with medication for slightly bloodshot eyes this time around.