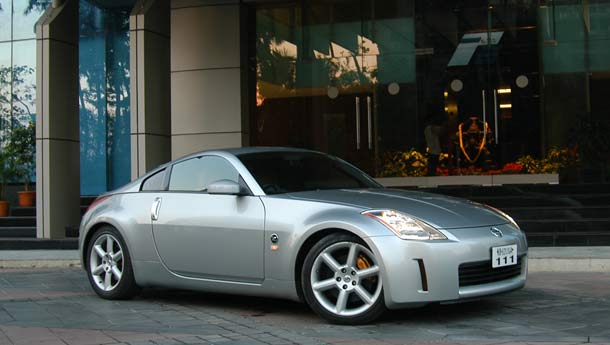 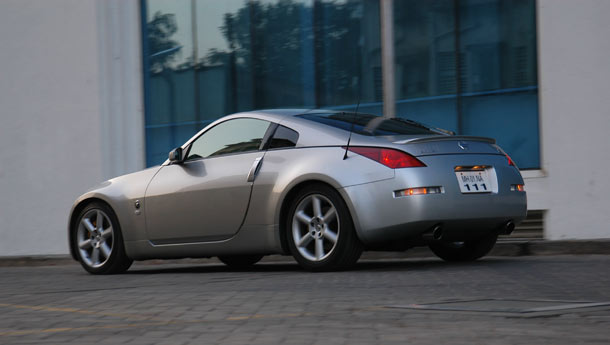 The street lights have yet to be switched off as the sun is still feeling too lazy to wake up. It’s winter, I understand. On any normal day, it would be the same with me too. But not today. After three long years of anticipation, I am finally getting a chance to drive the Nissan 350Z. Ever since the latest car to wear the hallowed Z badge was launched in 2002, I have been waiting. What would the new Z be like? For one, it certainly is not retro. A lazy designer would have fallen into the trap of taking elements off the previous Z cars and retro-fitting them into a new-age car. All to make nostalgic previous owners open their wallets – only to realise that it isn’t the same thing. The real test is to distil the essence of the original and incorporate it into the new machine. And I am happy to say that Nissan has passed the test.

Some aspects define Z cars. The engine has to be at the front, it has to be rear-wheel driven, it must perform effortlessly, it should look smashing and it has to wear a value-for-money price tag. The 350Z is all this and more.Its lines are crisp and it is one hell of a good-looking car. Every time I looked at it, I found a new design facet to dwell on. The muscular fender. The cut of the tail lamps. The air dam below the bonnet line. The very stylish cut of the doors. The swept-up headlamps. And that roof arch... right out of a Porsche! That’s all right, as long as it looks great.

Though Mumbai never sleeps, the roads are empty enough for me to give free rein to the 350Z. People who wouldn’t know about the car are turning their heads. The groggy all-night cabbie. The milkman. The BEST bus driver. Guys, I think I have made your day. Mine was made the moment I got a clear flyover. The 350Z is pretty docile at low revs, without being a handful to drive. But once you hoist the needle, the growl from the engine is extremely satisfying – I think the sound engineers from Nissan must have spent quite some time to get that note right. The 350Z attacks the flyover and very soon I am at the crest, as if the Nissan doesn’t understand the concept of gravity. The way it suddenly whips up into a frenzy is addictive. I don’t want to let go of the revs, I don’t want to let that needle drop below 6000, I don’t want to slow down. But slow down I must because the city has well and truly woken up.   It is pretty cosy inside, but without making you feel claustrophobic. A chromed Z badge stares back at you from the perfectly formed three-spoke steering wheel. The dash is extremely neat and unfussy, with all the instruments placed in such a way that you can get information without your attention getting diverted from driving the car. In the central instrument console, pride of place goes to the tacho that redlines around 6500 rpm, but the speedo is marked only to 180 kph. That’s because this is a Japan-specific right-hand drive model... the navigation system shows what looks like Hokkaido and there are strange Japanese characters liberally strewn around. I was looking for a button that indicated a chip-enhanced power boost or for Nismo somewhere, but my Japanese is not that good. Not that I needed it here.

The 350Z has one of the best V6 engines in the world. Nissan sure knows how to make all the complex bits that go into an engine perform like in a well-rehearsed philharmonic orchestra; their powerplants are refined and are unruffled whether you are barely crawling or making all the pistons cry for mercy. Displacing 3500cc, this 24-valve DOHC V6 pumps out 276 bhp at 6000 rpm and an awesome 36.7 kgm of turning force at 4800 revs. All that power is transferred to the rear wheels via a six-speed manual gearbox. This manual shifter is a stubby little number that is a delight to flick and your left hand is constantly resting on it. Not because the gear ratios are spaced out wildly, but because you’re looking for an opportunity to flick it around.

Surprisingly, I found the ride of the Z a bit harsh. This wasn’t the case with the 280Z and the 300ZX that I have driven before. Here, the texture of the street surface was coming right up through the Bridgestone Potenzas. Maybe the suspension was meant for track duty! Whatever the case maybe, it made sure that I was driving a car that was above the ordinary, one that is meant for the driver’s pleasure. Similarly, though it is a speed-sensitive steering setup, it was a bit more than well-weighted. At slow speeds it was actually a bit heavy and didn’t lighten up too much at speeds either. But that also made it that much more involving.   More than outright speed, this machine is best enjoyed powering into corners. That’s because Nissan engineers have achieved a fine balance, its weight bias is 53:47 front/rear. How they have managed it is quite brilliant. It’s not exactly a front-engined car, as the V6 is placed behind the front axle, closer to the driver – it’s actually ‘front mid-engined’! The benefit is that while the designer could give the front-end a narrow, wind-cheating snout, the engineers could make it well-balanced. Well, all this I found out later, but when I was driving the car, I really felt one with it. Suddenly, all the familiar roundabouts in Mumbai and the right- and left-handers were now opportunities for pushing the car and for enjoying the sensation of being pushed out of them. Every successive corner was meant for bettering the previous one. Seriously, this is the one single reason to buy a sports coupe over the humdrum sedans and hatchbacks I normally get to drive.

Soon, I found myself driving right through Mumbai’s morning rush hour traffic. Vehicles were filling up the roads and whatever remaining space there was between them was occupied by commuters streaming out of railway stations. That basically ended my short honeymoon with the 350Z. It was turning more heads now, but in the stop-go conditions, it remained calm. The V6 wasn’t begging for more revs to keep up with the so-called flow of traffic. At that moment, if not for the sporty steering wheel and harsh suspension settings, I could be in any other low-slung sedan – it was that well-behaved.

Then I realised that I couldn’t find any fault with this car. Was it perfect? Frankly, yes. The 350Z is perhaps the best sports coupe you can get in the world for the price it’s asking. It’s got all the right elements in it and looks fairly expensive too. It’s as if Nissan has finally made up for all the boring cars they put together in the pre-Renault days with this really well-crafted, superbly engineered, brilliant looking, fantastic-to-drive automobile. The Z legend lives on.