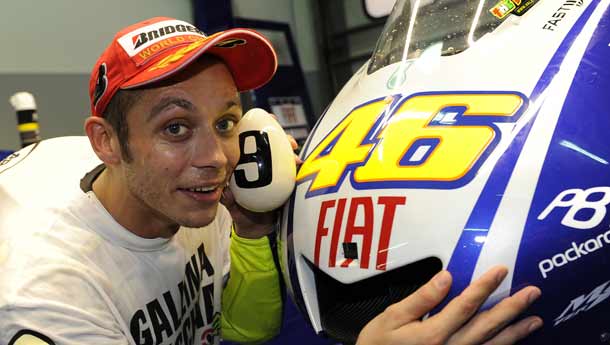 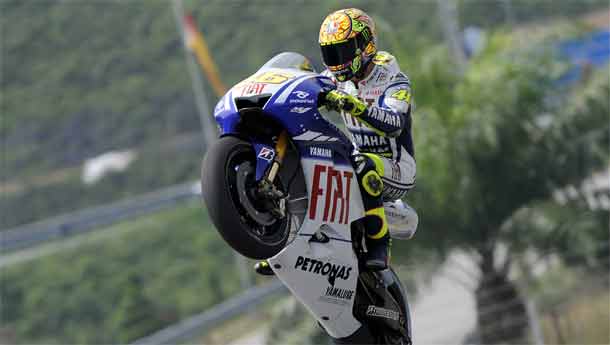 That's what Valentino Rossi's T-shirt said after the race in Sepang, and it went quite well with the special chicken helmet and the egg with '9' printed on it. Another one of Rossi's much-loved celebrations after he became world champion for the ninth time in his 13-year long career. However, as far as the race itself went, it was typical MotoGP nail-biter till the end.

Rossi, who had demolished his own lap record set on a 990cc GP bike, began from pole. After saying that he would be content with fourth position, all he needed to wrap up the title regardless of where title rival Jorge Lorenzo finished, the lap record showed that Rossi was out to become champion by winning the race. However, on race day, as soon as the 250cc race was over, the rain came down like there was no tomorrow and memories of the season-opener at Qatar came flooding back. Would the race start? Or would it be postponed? Thankfully, the rain became lesser and lesser until it was deemed safe to start the race with the 'Wet Race' sign. All the teams had spent their time setting up their bikes for the dry and were caught out by the rain, though this meant that all of them were in the same boat.

Hurried adjustments to the bikes done, Rossi was the first one to embark on his sighting lap, choosing to stay out on the track for two laps before taking his place on the starting grid. His team mate and title rival Lorenzo hoped to do the same thing but first, his '99' bike wouldn't start and then later when he came in, pit lane was already closed, which meant that he had to start from last place. Two disasters already and the race hadn't even begun yet. But there was more in store.

Rossi started well enough to lead into the first corner, but a mistake from him saw those in his wake come through and suddenly Rossi found himself in tenth place. And right behind him was Lorenzo, who had made a terrific start himself. It looked like the race for the title would go to the last round at Valencia, but as Lorenzo made his way up the order, Rossi shadowed his every move until the duo was fourth and fifth respectively. At the front, it was Casey Stoner, who found his wet setup to be head and shoulders above the rest, and by the time Lorenzo and Rossi were back in the game, he had stormed away to a 15-second lead. Behind him, it was the two Repsol Honda riders Dani Pedrosa and Andrea Dovizioso, but the two Yamahas were fast closing on them.   However, Rossi seemed to find second wind in the latter half of the race and began pulling away from Lorenzo. With every second he gained on the Hondas, his chances of a podium celebration became stronger, but Dovizioso crashed out, handing third place to Rossi. From there, The Doctor pushed until he was less than two seconds behind Pedrosa, though with a handful of laps to go, Rossi seemed to settle for third instead of pushing and increasing chances of a fall in the rain. So, it was Stoner from Pedorsa, Rossi and Lorenzo at the line, but it was Rossi who was once again king of the MotoGP hill as he came across the line with the front wheel hoisted in the air.

Rossi now has more records than he probably remembers. Here are a handful of them:

* Rossi has never missed a GP since his debut at the Shah Alam circuit in Malaysia in 1996. That's 226 GP starts, 166 of them being premier-class starts. How's that for a record?!

* Rossi has been on the podium 163 times in all classes, an all-time record.

* Rossi has the record for maximum number of premier class wins - 77.

* Rossi's got 63 fastest race laps to his name in the premier class, three less than Giacomo Agostini's record of 69.

* He is the only the second rider in history to cross triple digits in number of race wins - 103 to Ago's 122.