Falling sales, patchy monsoon thus far that may further have a bearing on demand going ahead and the overall slowdown in the economy has made analysts cautious on the consumption segment, especially the automobiles. And if reports are to be believed, the recovery in the auto segment is still far away.

ALSO READ: Next 6 months will be volatile for auto sector over BS-VI shift: MRF CMD

An analysis of past 20 years’ demand cycles done by Edelweiss Securities indicates that the auto sector is currently in the middle of a down cycle. Volume recovery, they say, is unlikely to be as sharp as in the past, unless there is strong fiscal support.

“The current slowdown is different from previous ones. First, it’s driven by domestic factors rather than global events; second, there is stiff competition from growing organised pre-owned vehicles market; third, the slowdown is characterised by significantly higher margin pressure; and is led by prohibitive jump in vehicle cost,” wrote Chirag Shah and Jay Mehta of Edelweiss in a recent report. 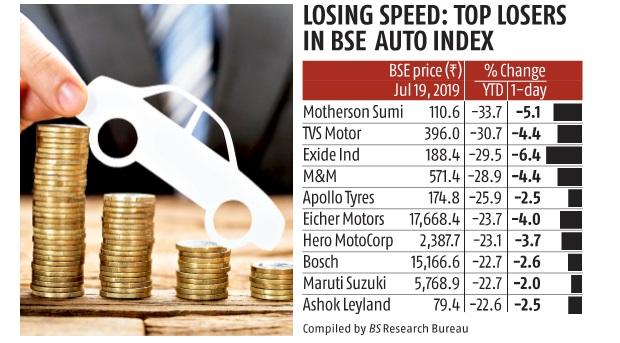 Historically, down-cycles last an average of 7 – 11 quarters, say analysts at Jefferies, but significant variation around these averages, with a range of 4-22 quarters, makes predicting timing of a recovery tricky. Implementation of BS-6 norms from April 1, 2020 adds to the complexity this time, they add.


At the bourses, auto stocks have been taking it on their chin with the Nifty Auto index hitting a three-year low on Friday. Nifty Auto index, the largest loser among sectoral indices, was down 2.5 per cent at 7,248 levels, as compared to 1.3 per cent decline in Nifty 50 index. The Nifty Auto and S&P BSE Auto index were trading at their lowest level since March 1, 2016.


The correction since September – December, 2017, according to analysts at Jefferies, has been in two parts. First, the initial six - 10 months was driven by valuation de-rating while, over last 9 – 12 months earnings downgrades has been the key driver. They expect earnings cuts to continue going ahead.