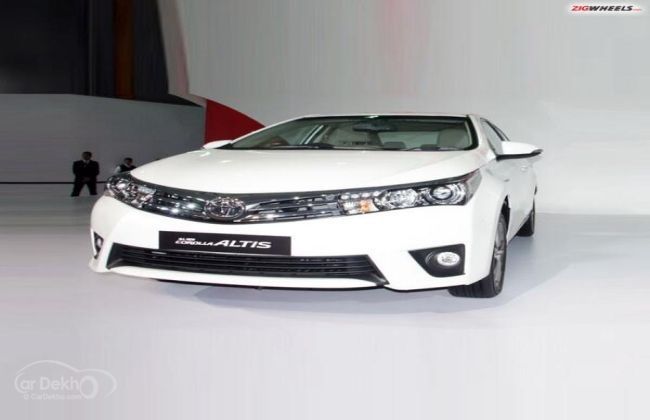 The redefined front fascia of the new Corolla Altis gets the wider air intakes; chromed trapezoidal grill integrates with the sharp angled sweeping back headlamps. The edgy end styling of the vehicle is contrasted by pronounced wheel arches. It retains most of its styling cues from the Furia Corolla concept, which is visible through the window line and the kink in the rear window. The shoulder crease line starts from the A pillar and merges with the rear tail lamp. At the rear, edginess prevails in the bumper design, sharp looking horizontally placed tail lamp cluster is sliced by the boot lid. 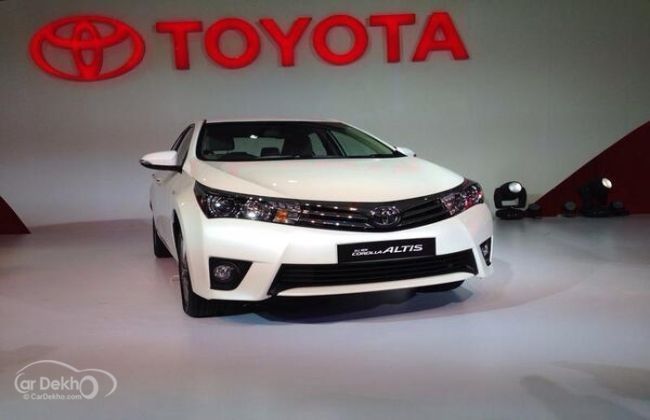 The 2014 Toyota Corolla Altis display very lean and elegant layout, color scheme of the dashboard is dual tone in black and beige. The piano black inserts around the center console goes well with the overall profile of the dashboard. The cylindrical AC louvers at the center reminiscent to the cars in 80’s and 90’s, though praising the lean profile of the dash. The centre console appears up market with seven inch high definition touch screen infotainment system display. The infotainment system boosts Bluetooth telephony, Sat-Navigation, AUX-in, USB and tuner it can also be used as a screen for the rear parking camera. Dimensionally, the new Corolla Altis is larger in terms of length, width and wheelbase than its predecessor; however, the height of the sedan has been reduced. The increase in wheelbase (100mm) ultimately turns into a roomier cabin and the vehicle is equipped with first in class rear reclining seats.

The 2014 Corolla will be made available in both petrol and diesel avatars. There are no mechanical changes; the petrol variant is powered by the 1.8-litre Dual VVT-i gasoline powertrain gathering 140 PS at 6,400 rpm. This engine is coupled to a 6-speed manual transmission or a Super CVT 7-speed automatic. The oil burner gets the 1.4-litre D-4D diesel engine mustering 88.4 PS at 3,800 rpm and comes mated to six speed manual.