Newsmakers of the year 2016: Ratan Tata and Cyrus Mistry 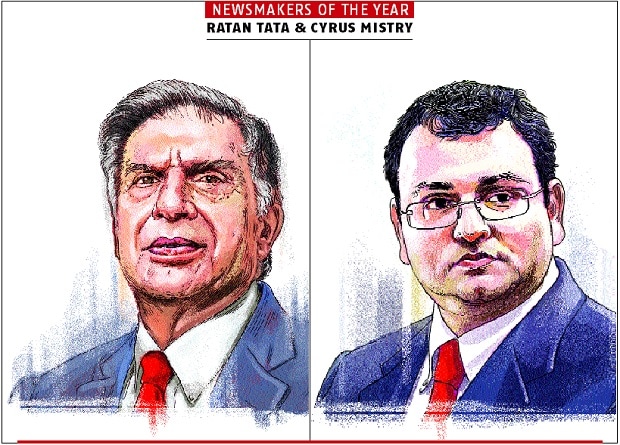 The autumn of a patriarch

As Ratan Tata, Interim Chairman, Tata Sons, celebrates his 79th birthday on December 28th, he will have many reasons to look back on 2016 with satisfaction. He is back in charge — even if temporarily — of the $100-billion Tata Sons and has successfully removed his former protégé Cyrus Mistry, 48, and his friend-turned-foe Nusli Wadia from the group -- perhaps forever.


Since October 24, the day Mistry was ousted by the Tata Sons board, Ratan Tata has been under attack by both Mistry and Wadia for his "failed business decisions". Tata is accused of lacking corporate governance, seeking information from listed Tata group companies and saddling the Tata group with expensive overseas acquisitions, leading to $18 billion of potential write-downs. There are many other charges made by maverick Member of Parliament, Subramanian Swamy, that are unprintable.

Tata himself has not replied to Mistry and Wadia’s allegations, preferring to maintain a dignified silence. But his closest aides are making up for his reticence. They say no director, including Wadia, had objected to the Corus Steel acquisition for $12-billion in 2007. Tata invited objections from directors in the pre-acquisition board meeting, saying this was the biggest decision of his life and of Tata Steel. When no one objected, Tata went ahead with the acquisition. Of course, Corus Steel was bought when the steel sector was booming and no one had foreseen either the Lehman crisis of 2008, or commodity meltdown of last year.

Of his other marquee decisions, his aides point out, Jaguar Land Rover has turned out to be a hit, churning huge profits for the group.  As for the flopped project to produce the world’s cheapest car, the Nano, it gave Indian manufacturing the confidence to try out new products and innovate.

Tata, of course, is a veteran of many battles for control, having ousted, ironically with Nusli Wadia’s advice, “satraps” like Russi Mody (Tata Steel), Ajit Kerkar (Indian Hotels), and Darbari Seth (Tata Chemicals) to bolster his position as head of the group

As Tata enters his 80th year, there is no doubt that he continues to command great respect. He still commands iron loyalty in Bombay House – headquarters of Tata group – which buzzes with stories of Tata’s personal benevolence, his down-to-earth personality and sense of humour. It’s the external image that has taken a bit of knock with the boardroom coup he led against Mistry.

In 2017, restoring that image will be contingent on who Ratan Tata selects as Tata Sons’ next chairman and what leeway he (or she) is given to the function. Tata’s spokespeople suggest a start may be made if he retires from the trusts, which collectively own 66 per cent of the group holding company, as he says he may. Also, they insist, Mistry’s removal was not about power but about “Tata values”, a point the next chairman will have to keep in mind.

It is easy to confuse 48-year old Cyrus Mistry, former Chairman of Tata Sons, as the boy next door.  With his shirt sleeves perpetually rolled up, shy smile and pragmatic manner, Mistry is the quintessential Mr Nice Guy. He was, ironically, the least likely choice to succeed Ratan Tata in 2012, and was chosen on the strength of the dedication and strategic acumen he displayed as a member of the search committee that was set up to appoint Tata’s successor. But managements of the various operating companies quickly learnt not to underestimate him after he made some tough calls to salvage the group from the more adventurous decisions of his charismatic predecessor and, till three months ago, his mentor.

Since the October 24 boardroom coup by Tata and the old guard, Mistry has continued an energetic and feisty battle through the media and courts to prove that his decisions were made in the best interests of the Tata group. Given the considerable influence Ratan Tata commands in the Indian corporate world and the Parsi community, Mistry must feel vindicated by the staunch support he has received from some of India Inc’s most respected names who sat on various Tata companies as independent directors. Nusli Wadia, Tata’s closest associate, has been the most active of them, but Deepak Parekh, Nadir Godrej and Analjit Singh have expressed their backing in no uncertain terms. “Mistry would often take advice from individual independent directors and ask for help. He was open to new ideas and always followed the advice given by us. He was more inclusive than Tata,” said one of them.

Mistry, together with his brother Shapoor, owns 18.5 per cent in Tata Sons, and 50 per cent in the construction giant Shapoorji Pallonji Group.  The wealth of the Mistry brothers is estimated at $13.4 billion, taking them to number 3 in the Indian billionaire list after Mukesh Ambani and L N Mittal, by Bloomberg estimates.

During his four-year term at Bombay House, Mistry seldom met the media and kept a low profile in keeping with his family’s tradition. But soon after his ouster, Mistry, who studied in Imperial College, London, gave his side of the story to the press after some Tata veterans accused him of “underperformance”.  As he explained in several eloquent press releases, he tried to clean up the “legacy hotspots” like Tata Steel’s European acquisition, Tata Motor’s Nano project, Indian Hotels acquisition of Sea Rock hotel in Bandra, which is now reduced to rubble, and Tata Teleservices.

Blaming Tata for taking the group to the brink of financial ruin, Mistry said the group is staring at potential write-downs worth Rs 118,000 crore. An analysis of the Tata group’s financial numbers by this newspaper has found credence in Mistry’s assessment.  If what Mistry says is indeed true, his principal job in the last four years has been to prevent the group from going belly up.

Which means that his successor as head of Tata Sons will have a much bigger challenge on hand than just upholding “Tata values”.