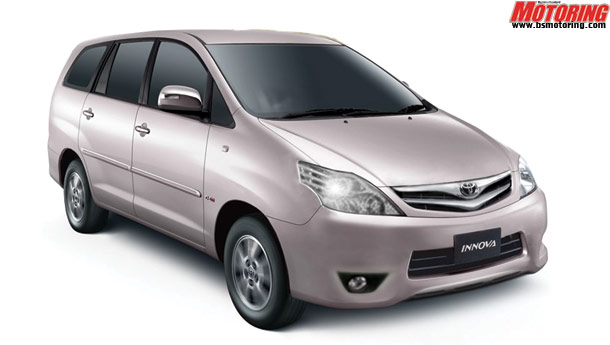 In the wake of new competition from the Tata Aria 4x2, the Toyota Innova is all set to get major updates. The Innova has been around for seven years now and to its credit, it still isn’t showing any sign of age. This isn’t surprising and credit goes to it being a huge leap ahead of its time when it was launched in 2004. Back in the day, Toyota stunned the Indian market by bringing in the Innova, despite the Qualis doing incredibly well and showing no signs of slowing down in terms of sales. The market in general had a tonne of doubts about whether the Innova was too upmarket to serve as an inter-city shuttle (a purpose the Qualis served rather too well) and also about how the Innova — a far more contemporary car than the Qualis — would take to rough road conditions. All such questions were dismissed in the blink of an eye and the Innova remains a favourite in its segment, while also, not surprisingly, eating into the share of some three-box sedans!

But since its launch, the Innova has remained more or less unchanged, save for a mild facelift in 2009 in the form of a revised grille and tail-lamps and also the all-important BSIV update. This time around, though, Toyota is rumoured to be cooking something more substantial. While we don’t know exactly what Toyota plans to offer, speculation never did anyone any harm. So the Innova in its refreshed avatar will get new headlamps, with new day-time headlight elements(refer our rendering) to start with. A new grille with horizontal slats is in the offing too along with a new bumper with integrated fog lamps. The tail-end will get updates in the form of a new stack of tail-lamps and also parking sensors on the rear bumper. Expect side-cladding on variants and perhaps tweaked roof-rails and outside rear-view mirrors too, apart from a new alloy wheel/wheelcap design.

The Innova’s interiors have remained the same since 2004 and Toyota will certainly use this opportunity to give it a major once-over. Expect even better quality materials (cold-metal inserts, soft touch surfaces) on the insides to enhance the ‘premium’ feel. Importantly, Toyota will look into increasing cabin space, especially so in the third row of seats by way of some clever seat design since there aren’t any changes to the wheelbase or length of the car. Lastly, the engine may not get any major changes, although a few horsepower more will be more than welcome considering the Aria 4x2 makes 140 bhp. With the competition catching up, slowly but steadily, these changes are of the essence and will give Toyota, which is enjoying good sales of the Etios sedan and the Liva hatchback, even more reason to celebrate. Expect the updated Innova to be out on sale sometime in early-2012, perhaps after an Auto Expo unveiling!