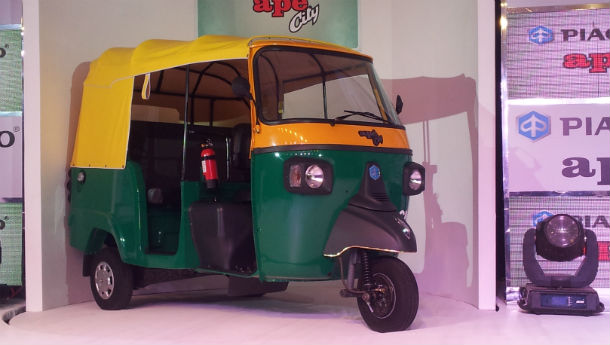 Piaggio has launched a new three-wheeler passenger vehicle powered by alternate fuel. The new Ape City range will come powered by fuels like LPG and CNG, along with petrol variants too. The engine has been developed specifically for India and Piaggio claims that it will deliver best-in-class mileage (10 per cent more than competitors) and low emissions as well.

The Ape City also has the highest torque rating amongst its competitors, which means it will also have good acceleration and will climb flyovers with relative ease. Despite its compact footprint, Piaggio claims that the Ape City comes with good seating space and ergonomics as well.

The Ape City is available with a 12 month/36,000 km warranty and four free services. While Piaggio says that the Ape City will be low on maintenance, too, oil change intervals are set at 10,000 km. Maintenance intervals are also flexible.

Piaggio already has 36 percent market share, that they hope to increase with the launch of the Ape City. Plans to export this model Latin America, Africa and countries within the subcontinent have also been announced.