Tata Motors’ UK-based subsidiary Jaguar Land Rover (JLR) reported its highest-ever sales for a year with volumes topping the 600,000 units-mark for FY17. Led by a 21 per cent growth in March 2017 sales and robust performance in China and the US, JLR reported a 16 per cent growth for FY17.  Most of the growth was on account of Jaguar’s new launch F-PACE, coupled with traction in XE and XF models which helped the brand post 83 per cent sales in the last financial year. Most other luxury carmakers (BMW, Audi and Mercedes) are trailing the company on the sales growth front.

Growth going ahead is expected to come from the all new Discovery launched in February, a mid-sized Range Rover called the Velar in the June quarter and the new Range Rover/Range Rover Sport towards the end of CY17. Land Rover sales for FY17, which was up by just one per cent, was due to stocks running out for Discovery and Defender and given the new launches, this situation is expected to be normalised. Analysts at JP Morgan say there are multiple tailwinds which will drive JLR’s net profit performance in FY18. The launch of six new sports utility vehicles over the next one-and-a-half years is expected to improve revenues and margins as also increase the company’s market share. Over 90 per cent of the company’s sum of parts valuation is on account of JLR. 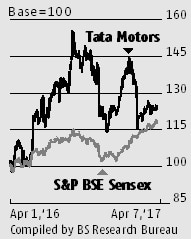 The story on the Indian operations, however, is different. March quarter performance is expected to be muted given volume pressures in the medium and heavy commercial vehicles (M&HCV) segment and jump in raw material costs. Analysts estimate the company could be stuck with inventory worth Rs 4,000 crore, which will need to be exported. Commercial vehicle sales, despite the discounted offers, were down six per cent year-on-year. Uncertainty related to GST implementation as well as muted industrial activity has led to declining demand for M&HCVs. Analysts expect demand to improve on the back of a scrappage policy, regulatory changes and strict compliance on overloading restrictions.

At the current price, the stock trades at 2.7 times its FY19 enterprise value to operating profit, which analysts at Nomura believe are reasonable. Further at 9.6 times its consolidated FY19 earnings, it is the cheapest auto stock among large-cap auto companies. Most analysts have pegged their target price around the Rs 560- 570 levels which, from the current levels offers an upside of over 20 per cent.