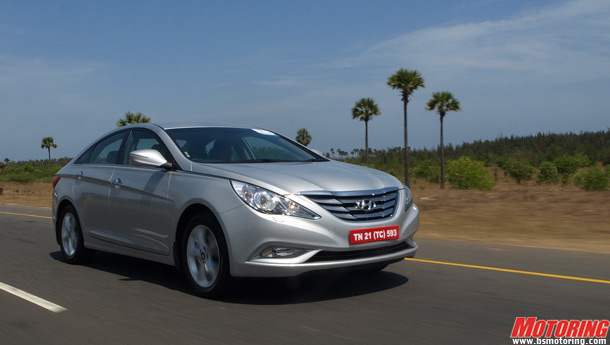 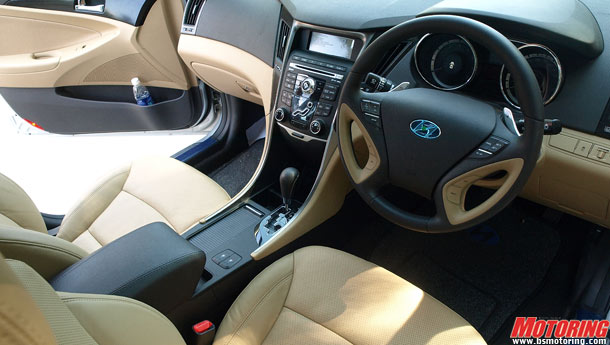 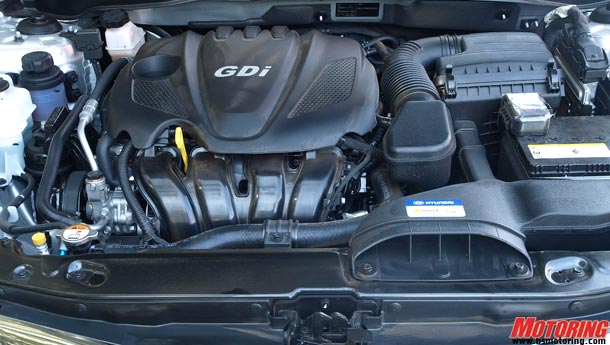 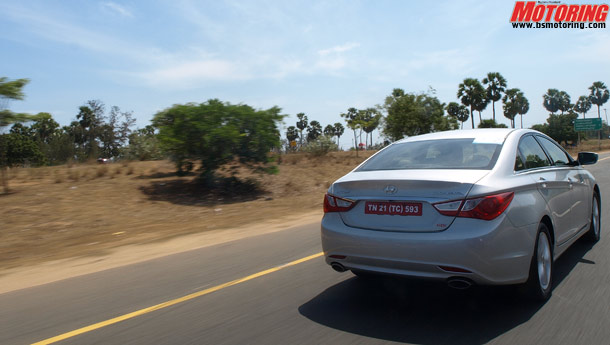 What do you call a D-segment sedan that’s part Audi A6, part four-door coupé and part Korean? The new Hyundai Sonata, that’s what. So far, the Korean manufacturer’s success at establishing a foothold in the D-segment game has been limited at best, since it has been unable to really take the fight to the big boys — the Honda Accord, Skoda Superb and Toyota Camry. The previous Sonata went through two iterations, each with its own strengths. Both cars offered good value in and of themselves, but somehow (apart from the very first one, that is) the Sonata hasn’t been as much of a success story as it should have been; given the way Hyundai’s other models sell, it has definitely been an underperformer. The company hopes to change all that with this, the latest model, so let’s have a close look at the car and find out if it can run with the heavyweights.

Enough has been written about Hyundai’s “fluidic” design philosophy, so let’s just say that they’re really big on it and are taking every opportunity to slap it onto a variety of cars. By and large, it works; a family resemblance has been created, without all the cars looking exactly the same. On the Sonata, the effect is mixed. On the one hand, the car now has undeniable presence, turning heads throughout my drive. Look at it from the back and it’s a dead-ringer for an Audi A6 (no bad thing); view it in profile and the roof slopes down in a Mercedes-Benz CLS-like way; the 17-inch alloys look good and fill the arches nicely. A feeling of dynamism has certainly been added. My problem with the design lies squarely at the front, where the enormous grille, lovingly rendered in chrome, is too loud. There is a lack of cohesion here, as far as I’m concerned. Indeed, there are lashings of chrome all over this car, which may well endear it to a particular category of customer.

There is one thing that Hyundai is particularly good at, and that is stuffing its cars with boatloads of features, thus causing potential buyers to disregard any other shortcomings the vehicles might have. This strategy has worked wonders for them so far, and is very much in evidence in the Sonata as well. Just take a look at this list:
* Leather seats
* Front and rear seat heating and cooling (a segment first, although the manual version only has heated/cooled rear seats)
* Rear camera and parking sensor
* Six airbags
* Rear seat armrest with audio controls
* Bluetooth, USB/AUX, six-CD changer, six-speaker audio system
* Steering mounted audio and Bluetooth controls
* Dual zone automatic climate control
* Keyless entry
* Push start (AT)
* Chrome and wood finish
* Electric, heated ORVMs
* Headlamp washers
* Cruise control and paddle shifters (auto)

There are more features on the standard equipment list, by the way, and nobody should really be able to complain that they’re not getting their money’s worth. This is a very comfortable cabin, with plenty of leg and head room; to round off the practicality, a huge boot has been thrown in as well. The gauntlet has been thrown down on the features front, that’s for sure.

Thankfully, in the engine department, the Sonata hasn’t sold itself short. Press the starter button and the 2.4-litre, four-cylinder GDI petrol engine purrs to life with scarcely a sound; refinement, sound insulation — check. Good for 201 bhp@6,300 rpm and 25.5 kgm@4,250 rpm, the direct-injected powerplant has no shortage of shove or grunt; combined with its refined nature, this engine makes it easy for you to find yourself at high cruising speeds before you know it.

What lets the engine down somewhat is the six-speed automatic gearbox, which is a bit sluggish, especially while downshifting; however, it’s smooth, and will make for relaxed, effort-free highway cruising and city driving. The six-speed manual, on the other hand, is much more fun to drive, with smooth shifts and a light clutch.

I know, you’re asking whether the Sonata is as, er, interesting a handler as the Verna. I have good news. It isn’t. Whatever Hyundai has done with the suspension on this car needs to be replicated on their other models, especially the Verna. It would be a stretch to call it sporty, but this particular combination of McPherson struts with coil springs up front and a multi-link set up at the rear manages to hit a sweet spot. At high speeds, the Sonata is very planted, and it soaks up all manner of bumps and potholes effortlessly — the ride quality is plush. However (and this is the crucial part), plushness does not come at the expense of handling. The steering feel could be sharper and, if we’re nit-picking, the suspension could be further tuned, but suffice it to say that if you put the Sonata through a series of fast corners, it will go through them reassuringly, without you wondering whether the back is being able to keep up with front.

This brings me to a concluding question: why no diesel option? In this day and age, Hyundai is being very brave by not offering an oil-burning Sonata, and it will be interesting to see how long they can hold out against the competition without a diesel Sonata in the stable. For now, though, what they offer is a very capable, comfortable car that’s overflowing with features, one that has a certain presence and one which actually handles like a proper car should. Given its pricing of Rs 18.52 lakh for the manual and Rs 20.62 lakh for the automatic (both ex-showroom, Delhi), the Sonata certainly seems destined for better times ahead. The writer was invited by Hyundai to drive the new Sonata in Chennai