Toyota has finally introduced the next generation Corolla sedan at the ongoing 2014 Delhi Motor Show. The company has recently stopped the production of Corolla Altis, making a way to introduce the new model in the country. (The next Toyota Corolla is expected to be launched by the mid of 2014. It has been priced at Rs. (ex-showroom, Delhi). 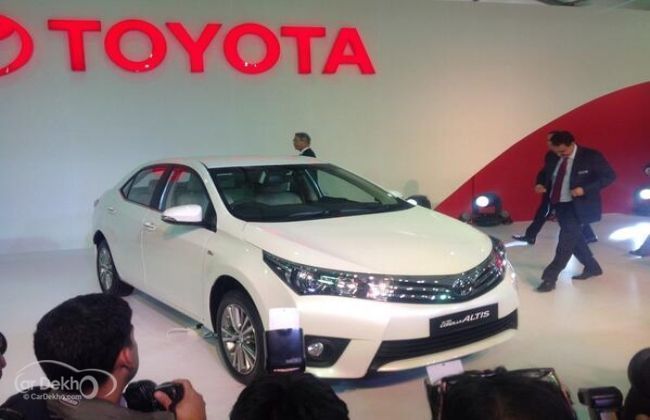 The front fascia of the new Corolla gets the bold air intake in the front bumper, lustrous trapezoidal grill and angular shaped headlamps. The wheels are pushed out towards the corner to accentuate the wheel arches. It retains most of its styling cues from Furia Corolla concept, which is visible on the window line and the kink in the rear window. The aero-dynamic line flows from the boot lid to the C-Pillar, offering a sporty look to this sedan. Its rear end feature black air diffuser, angular shaped tail lights and sleek rear spoiler.

The 2014 Toyota Corolla sedan sports dual tone interior, with the combination of piano-black gloss trim and metallic embellishment. The centre console appears very elegant and the company has used several colour scheme on dash and door panels to enhance the overall appeal of the cabin. Dimensionally, the new Corolla is larger in terms of length, width and wheelbase than its predecessor, however, the height of the sedan has been reduced. The increase in wheelbase (100mm) ultimately turns into a more roomier cabin. The top-of-the line model also gets heated seats.

The company has added several ingredients such as an acoustic glass windscreen, an instrument panel seal between the cowl and the windshield, improved floor carpet insulation, an inner dash silencer pad and others, to reduce the NVH (Noise, Vibration and Harshness) levels. The 2014 Corolla will be made available in both petrol and diesel guise. It is powered by the same 1.8-litre petrol engine that churns out a maximum power output of 140PS. The oil burner gets the 1.4-litre diesel engine producing 90PS. The petrol mill is being offered in both six-speed manual and the 7-speed (4-speed) automatic gearbox with paddle shifters, the diesel engine is linked with a six-speed manual gearbox.