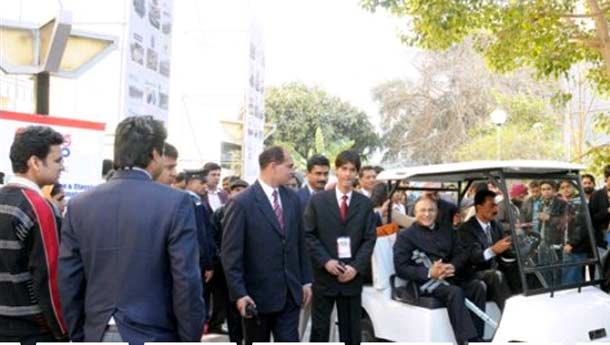 The New York Auto show in April, with 1.2 million visitors, comes the closest to matching this record. The third most frequented automobile extravaganza is the Shanghai Auto Show with 600,000 visitors.

In 2009, 30 large auto shows were held around the world. Most of these were in the US, Europe and China. None matched the expected visitors for the 2010 Auto Expo.

“The 2010 Auto Expo will be bigger, brighter and better than the previous shows. The growing number of visitors indicates the rising importance of India as a key automobile destination,” says Pawan Goenka, president of the Society of Indian Automobile Manufacturers (Siam) and President, Mahindra & Mahindra.

The Auto Expo is jointly organised by CII, Siam and the Automotive Component Manufacturers Association of India.

“The New Delhi Auto Expo is held only for seven days, while the New York Auto Show is open for 10 days and the Shanghai Auto Show is spread over nine days. The New York Auto Expo attracts a large crowd because the show venue is located in the heart of New York City’s 34th and 39th Street intersections, which are busy locations. Besides, the show is also promoted as a significant tourist attraction, while Delhi Auto Expo’s Pragati Maidan does not enjoy this benefit,” says one industry executive.

There are three reasons for the big draw. For one, India is a fast-growing market for cars and two-wheelers. Compared with China’s 27 cars per 1,000 citizens, India has only seven car owners per 1,000 citizens. “Delhi’s Auto Expo event is the bellwether for the automobile industry. Both domestic and global companies can showcase products to the largest potential audience,” says Venu Srinivasan, President of the Confederation of Indian Industry (CII) and CMD of TVS Motor.

Two, the 2010 edition holds immense significance for global vehicle manufacturers, since India and China were the fastest to recover from the financial crisis that swept the world last year. Car sales in the domestic market from April-November this year grew 21 per cent, while sales of medium and large trucks and buses in the same period dipped by barely 2.4 per cent. Much of the key markets in the US and Europe are still in the negative and yet to witness a recovery.

Three, global car and truck majors who skipped this year’s key events like the Tokyo Motor Show are lining up to showcase their products at the capital’s Auto Expo. “There could be multiple reasons as to why companies avoided participating in the global auto shows. One reason could be cost-cutting. For many of these global vehicle manufacturers, India is yet a virgin market and showcasing a concept model gives tremendous mileage. Component manufacturers benefit greatly from events like these,” says Mohit Arora, senior director, Singapore based JD Power & Associates.