New Chevrolet Trailblazer to be launched in India during festive season

General Motors India is planning to bring the face-lifted version of the Chevrolet Trailblazer SUV to the Indian market during the festive season. 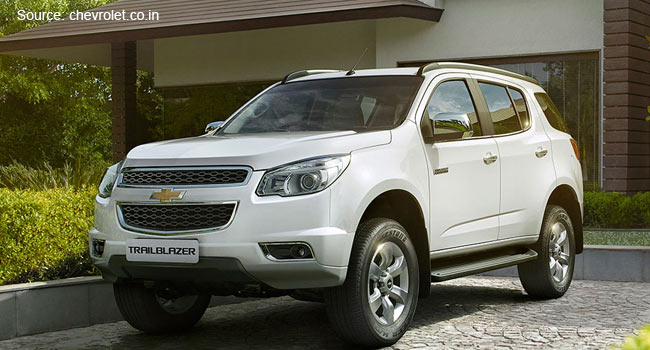 The American carmaker had first launched the SUV in India in October 2015.  The new Chevrolet Trailblazer was unveiled at the 37th Bangkok International Motor Show in March 2016.

According to sources, the new SUV is expected to be launched during the coming festive season. The big SUV from Chevrolet has received an all new face, in line with the Colorado pick-up sold in the US market.

Compared to the current version sold in India, the new Trailblazer is more angular and sporty in design. The face of the SUV has been reworked with tweaked bumpers, bonnet and headlamps that give it a more butch look. The signature split grille with bowtie emblem is now more upright. There are some chrome touches on the grille as well.

The major addition in the side profile of the SUV is the newly-designed alloy wheels. At the rear, the tail lamps get new inserts while the bumper has also been tweaked slightly. The interior features a new dashboard with a larger infotainment system and support for Apple CarPlay. The instrument cluster also gets a minor update.

The SUV is expected to continue with the same powertrain units. The Trailblazer is powered by a 2.8-litre Duramax four-cylinder turbo-diesel engine that develops 197bhp of power at 3,600rpm and 500Nm of torque at 2,000rpm mated to six-speed automatic transmission. Only the 4x2 version is on offer in India.