India’s largest two-wheeler maker could be a beneficiary of an expected pick up in rural-led consumption. While most brokerages believe that in the short term, it could see headwinds on account of BS-VI transition, higher prices and the coronavirus pandemic, volumes are expected to pick up in the second half of FY21.

Though year-to-date volumes in its core motorcycle segment are down 13 per cent, the company continues to maintain its market share. Analysts at Kotak Institutional Equities indicate that Hero’s share at 51-52 per cent has been maintained over the past six years despite concerns over Bajaj Auto’s increased competitiveness and a decline in its market share in the premium motorcycle segment. Profitability per bike has also increased over the last five years by more than 40 per cent to Rs 6,304 in FY19. 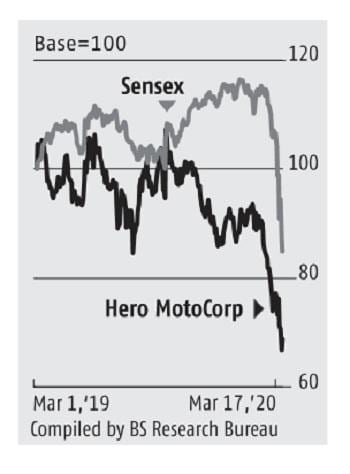 The biggest trigger for the stock, however, is the attractive valuation. The stock has corrected over 50 per cent from peak levels and is now available at 10 times trailing 12-month earnings as compared to the historical average of 18 times on this metric. Analysts at HDFC Securities say that after the fall, the stock is trading below the 2008 crisis levels on the price-to-book value basis at 2.3 times. Even on an enterprise value-to-sales basis, it is at the 2008 levels.


Investors, however, will need a longer-term horizon, given the worries on account of domestic slowdown and a sluggish marriage season. Further, the company has not been able to make much progress in the premium motorcycle segment and has been losing market share in scooters. Volumes in scooters were down 44 per cent year-to-date. Most brokerages have cut their volume and earnings prospects of the company in the near term.