Nano sales on the rise 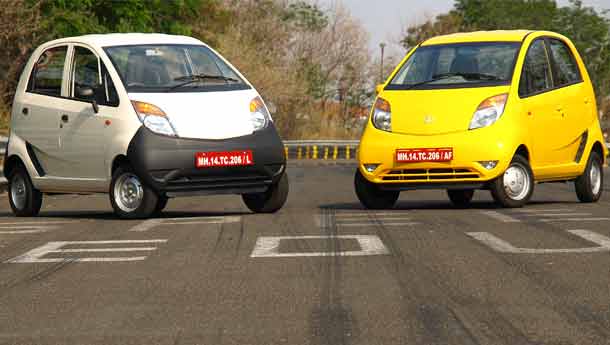 Its wholesale numbers may be on the decline, but Tata's small car Nano is picking up in sales at retail level as dealers at different parts of the country cash in on reduced down payment scheme introduced by the company ahead of the festival season.

Dealers said while consumer confidence on the car has slowly become much stronger and conversion rate of enquiries has risen to as much as 35% in certain areas, an attractive discount of up to Rs 20,000 has also helped in wooing buyers.

While the company does not report its retail sales numbers, according to industry sources Nano's uptake from showrooms has been on the rise since August.

This is in contrast to the 17% decline in the cumulative wholesale numbers in the April-August period this fiscal, at 26,441 units as against 31,882 units in the same period a year-ago.

"A lot of existing customers are helping in spreading through the word of mouth and footfalls at our showroom enquiring about the Nano has gone up. The conversion rate is up to 35%," Kolkata-based Lexus Motor owner Binod Agarwal said.

"We were averaging about 40-45 Nanos a month earlier but it went up to 52 in August and 109 in September. We are hoping October should also be good," he added.

Expressing similar views, Vijaywada-based Jasper Industries Managing Director Managing Sumanth Badiga said: "In our case, rural sales have really picked up. We have been able to largely target customers for whom the Nano was intended."

He said in August alone, Jasper Industries sold 301 units, while in September it did 150 Nanos.

"In October we are expecting to sell about 200 Nanos," Badiga said, adding small time traders, shop-owners, village purohit and teachers are among the customer profiles.

Interestingly, the Nano is finding a lot of woman buyers in Bangalore, which has helped in increasing sales.

"Around 30% of buyers from our showroom are women. They are either self-financed first time buyers or a family member buying for them," Bangalore-based Prerana Motors Managing Director Pramanand Shenoy said.

However, he said the perception of Nano as a 'cheap car' was working against the product as "it was a proper car".