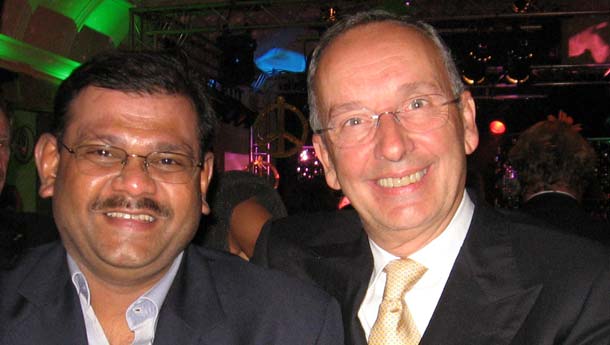 I went for a concours d’elegance abroad for the first time. Called the Schloss Bensberg Classics, the event was held last weekend in a town close to Cologne in Germany. It was the first time it was held, and it had not just a concours, but a Rally Historique as well. So what were the cars that were present at the event? Well, I am not saying much at the moment (not that you can’t find out), but it suffices to say that many of the vintage and classic cars out there are usually seen by people in coffee-table books - ultra-rare or ultra-special or ultra-mind-blowing or all of the above. But this blog is not about the cars I saw for the first time in real life or how I fared in the rally (yup, I drove a classic...), but the people I met. For most of us, the cars are the heroes, but you know, there are some special car people out there. So which legends did I meet?

He was already the legend who penned the Alfa Romeo 156’s flawless lines when I saw him sketch the 166 in front of the world press in Madrid in 1998. After breezily drawing the 166’s distinctive moustache with a marker pen, he put some ink on his thumb and rubbed it in a straight line on the paper – thus indicating the broad lightcatcher on the car’s flanks. All of us press guys applauded when he finished. Much later, the Italian was head-hunted by Volkswagen to bring some pizzazz and spirit into the Seat lineup. And then he was steadily elevated to become the overall head of VW Group design. Which means he’s big... really big. And he influences car design ranging from the humble VW Lupo to the Bugatti Galibier and all the Volkswagens, Skodas, Bentleys, Audis and Lamborghinis in between!

Before leaving India, I had dug out the press brochure of the 156 which had his illustrations of the car in them, as well as an Alfa Romeo Centro Stile brochure which had an image of a very young De Silva (with lots of hair) plus an Audi A5 brochure. And a red marker pen. When I saw him and showed him all these material to be autographed, he was delighted. Especially on seeing the Alfa stuff. I told him that to me, his greatest design was the 156 and not the Audi A5, as he has claimed. I told him that it’s more difficult to design a mass-produced four-door sedan, make it look like a coupe (with those hidden door handles!) and sporty rather than a smaller volume, premium GT like the A5. He did not violently agree with me (there were lots of VW people around), but he did nod subtly in acknowledgement. The next day when I met him again, he gave me a warm hug and posed with me for more photos. Wow.

The master. One of the most influential designers, a living legend of our times. The head of Italdesign, Giugiaro is usually the first name that comes to mind when you say ‘Italian designer.’ What a lineup of amazing cars he has designed; many of which were produced in massive numbers, thus touching the lives of millions of people across the world. Not many designers’ names are evoked as much as his is. Heck, even the press write-up in India for the Fiat Grande Punto talks about Giugiaro’s lines. His talent was spotted at the Turin art school’s year-end show by the legendary Dante Giacosa, who offered him a position at Fiat’s Special Cars Styling Study Department. Giugiaro was a 17-year old boy then, and Giacosa’s find has enriched the world after all these years. And how! The Daewoo Matiz, the first VW Golf/Scirocco, the Fiat Uno/Palio/Siena, the Dino, the Bugatti EB118, the DeLorean DMC-12, the BMW M1, Alfa Romeo Brera, and Maseratis like the Merak, Ghibli and Bora... and of course the 3200 GT.

This time around, I had scrounged in the BSM archives to get a photograph of the Matiz and a beautiful 3200 GT brochure which had his illustrations. I got both autographed by him and also got myself clicked along with him. I couldn’t talk to him much, as he prefers to have an interpreter by his side, but there were so many questions to ask him... may be some other time.

Well, this was completely unexpected and I was not prepared. If I had known that the man who until recently had the best job in the world would have been there, I would have taken something suitable with me to get his autograph. I mean, someone who’s been living 40 years of his life literally on the fast lane wouldn’t be at an old car event which had cars that would strain to hit a fraction of speeds he does on an average. But the man was there all right. After 40 years of beating the crap out of cars that few people wouldn’t even manage to explore the limits of, Balboni has now become a certified legend. Everybody now knows who Balboni is, especially since Lamborghini gave him a few months back a retirement gift that one can only dream of: a special edition Gallardo named after him, and built with his inputs. Imagine rear-wheel drive, different suspension and aerodynamic settings and revised weight distribution.

As usual, I got his autograph in my notebook and got the standard ‘awe-struck Indian with a big shot’ picture taken. And I met him several times over during the event, and he greeted me like a long-lost friend always – shaking hands warmly and smiling happily. No airs about him and completely humble. He drove a Lamborghini 400 GT at the Rallye Historique and even stopped to enquire when we had to stop our car for something. What a guy!