Hyundai has showcased the N2025 Vision Gran Turismo concept at the ongoing Indian Auto Expo. The concept was unveiled with an aim at promoting the Korean automaker’s ‘N’ sub performance brand and it does that really well. There have been many instances when a sports car or for that matter a concept car has turned out to be quite striking to look at, but not particularly beautiful. Such is not the case with N2025, as it breaks the  notion and for that matter shatters it. If this is any indication of what Hyundai plans on bringing to India with its ‘N’ brand, the the prospect of the brand seems quite promising. 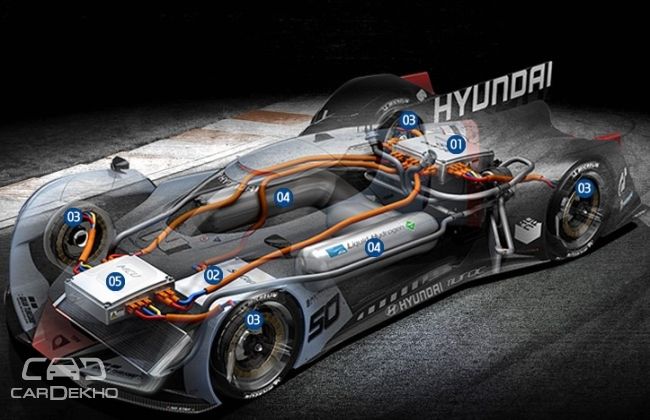 The concept provides an insight into what the next-generation of high-performance vehicles will be like and by the looks of it, they would be a cross between a F1 car and a spaceship. Speaking of space-age technology, the N2025 concept’s powertrain incorporates the world’s first ever mass-produced hydrogen fuel cell, which was manufactured by Hyundai in 2013. The eco-friendly powerplant system produces 884PS of total power output, 680PS of which is harnessed from the dual fuel cell stacks, whilst the super capacitor system provides the remaining 204PS. Another innovative incorporation is the incorporation of electric motors, which are in-built in the four wheels of this futuristic hypercar. This this also helps the car provide optimum traction. Considering, Hyundai has the is the largest pavilion at the Auto expo, this concept can be considered to be the highlight of the show.