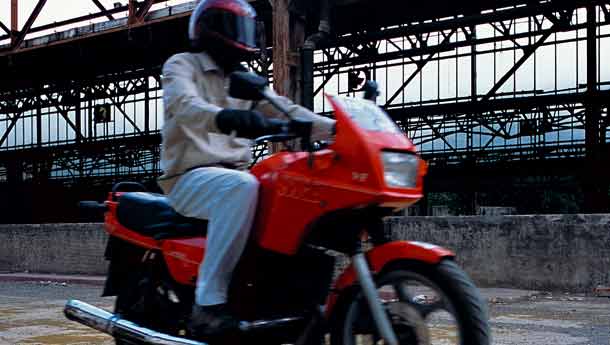 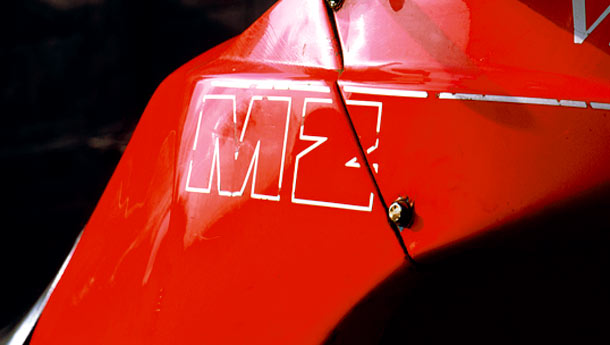 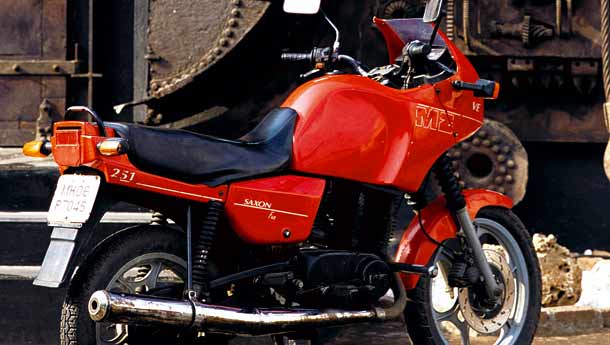 Think of the erstwhile East Germany and most of the images that come to mind are usually fairly grim. People getting shot, soot-blackened factories spewing toxic fumes, big-brother Stasi agents watching your every move and itching to throw you into the Stalag, stern-faced women with scarves on their heads, people getting shot, Checkpoint Charlie, the Berlin Wall and people getting shot. Not the best place for your honeymoon, then. Adversity, however, always seems to breed greatness, and the fact that a company like MZ (Motorradwerk Zschopau) and an all-out genius like Walter Kaaden came out of there surely redeems the place somewhat.

It isn’t often that an MZ is spotted on Indian roads and it’s a good bet that the bike you see in the photographs is one of very few in the country, perhaps even the sole example. As a matter of fact, it doesn’t even qualify as a true classic – it’s only eleven years old, was bought in Dubai by its current owner and was made under license in Turkey by a company called Kanuni (no Hindi or turkey jokes, please). However, the fact that it is so rare and that it has such illustrious predecessors more than makes up for any seeming lack of classic credentials.

In 1907, a Danish engineer called Jorgen Skafte Rasmussen founded a company in Zschopau, which was then in undivided Germany. The first steam-engined car can be credited to him and it was built under the name of DKW (Dampf-Kraft-Wagen). Another fifteen years passed before the first of many two-stroke motorcycles left the company’s production lines. DKW then entered into a partnership with three other manufacturers in 1932 – Audi, Horch and Wanderer. The new company was called Auto Union and their trademark, the four-ring logo, is still used by Audi today.   The Zschopau factory soon became the world’s largest producer of two-stroke engines and motorcycles but, after the Second World War, Germany was split up by the Allies, Zschopau suddenly found itself in East Germany and the DKW company was dismantled by the Soviet Army. In 1956, however, the company was rebuilt, renamed MZ and went back into the manufacture of two-stroke motorcycles, producing 80,000 machines a year. The company’s golden years were just about to begin.

Around this time, an engineer working for MZ, a whiz called Walter Kaaden, made an important discovery. He realised that there was power in the sound waves that came out of a conventional two-stroke exhaust system and set about trying to find a way to harness it. Cue the invention of the expansion chamber, which first sucked the cylinder clean of spent gases (thereby drawing fresh air/gas mixture into the chamber itself) and then stuffed all the charge back into the cylinder, which was thus filled to greater pressures than could be achieved by merely venting the exhaust port into the open atmosphere. Kaaden also perfected rotary valve technology and, combined with his expansion chamber, the two discoveries made for cracking race motorcycles. Kaaden’s 1961 MZ125, for example, was the first engine in history to exceed 200 bhp per litre and was also the first two-stroke ever to win a 125cc Grand Prix.

In 1957, MZ entered Grand Prix racing for the first time and from then until 1976, MZ works racers competed in World Championships for the 125, 250 and 350cc classes. They secured 13 Grand Prix victories (Mike Hailwood’s win in 1963 on an MZ250 being among the most memorable) and 105 rostrum finishes, a remarkable achievement given the Cold War and the harsh economic conditions in East Germany. Quite apart from these hurdles, MZ had been struck a major blow in 1961 when one of their riders, Ernst Degner, defected to Suzuki and carried with him a large part of Kaaden’s pioneering technology. This gave the Japanese motorcycle industry the know-how they needed to build race bikes that could keep up with Kaaden’s MZ rockets, which were truly the forerunners of today’s racing bikes.   The MZ I rode, however, was as far removed from a racing bike as you could possibly get. Mass-market MZ motorcycles were built to be cheap to buy, cheap to run, simple to maintain and utterly reliable – their 1950 RT125, for example, became one of the most copied motorcycles in the world because it was all of the above. Similarly, the MZ on which I was puttering around felt like it had been built to the same specifications. The 243cc, 21 bhp machine was ruggedly handsome in appearance and even that bulbous tank didn’t look too bad in the overall scheme of things. It wasn’t exactly a superbike on the go, but a twist of the throttle brought forth perfectly acceptable acceleration, enough to keep the senses occupied. In addition, it was comfortable to ride and felt as solid as a rock – indeed, its owner said that apart from regular service, he’s never had to do anything major to the bike.

The next time you fit a nice expansion chamber onto your smokin’ stroker and immediately experience a grin-inducing kick in the pants, don’t thank the men in white coats in Japan. A genius named Walter Kaaden slaved over a hot furnace to ensure that you, the two-stroke aficionado, could have more of something that is never enough: power.

After Germany was reunified in 1989, MZ was put under the care of Treuhandanstalt, a holding which later privatised the company. A private investor was found and, in 1992, MZ (Motorrad und Zweiradwerk ) GmbH was formed. Realising that new markets had to be explored if the company was to succeed in a new economic era, and without government subsidies supporting the old two-stroke operations, MZ launched the single-cylinder Skorpion models, which was a clear move away from the traditional commuter models the company used to make. The Skorpion was well-received and even won some design awards. Originally to be Rotax powered, by the time the new model reached production the engine had been uprated to the 660cc Yamaha five-valve single used in the Tenere.