Muted outlook a bigger headache than margins for Maruti Suzuki

A weaker-than-expected December quarter performance, especially on the margin front, saw Maruti Suzuki shed 7.4 per cent in trade on Friday.

The operating profit margin at 9.8 per cent fell about 600 basis points over the year-ago quarter, and was way below analyst estimates. Analysts had pegged it in the 13-15 per cent range. The sub-10 per cent margin posted by the company is a first in about 20 quarters.


The biggest item responsible for Maruti missing the margin was higher commodity costs. As a percentage of sales, it was up 320 basis points to 74 per cent.


Adverse forex movement (yen-rupee) was also responsible for the higher input costs. While costs have started to recede, given the one-quarter lag, the impact will be felt in the current quarter. The company has also increased prices this month, which should help offset some of the cost pressures.


What aggravated the cost situation was the muted revenues in the quarter, given a volume fall of about 1 per cent.


Given the increased inventory at the dealer level, the company has had to give higher discounts to sell them. Average discount at Rs 24,300 (including support to dealers) was one of the highest in recent times and was about Rs 5,000 more than the average over the last three quarters. 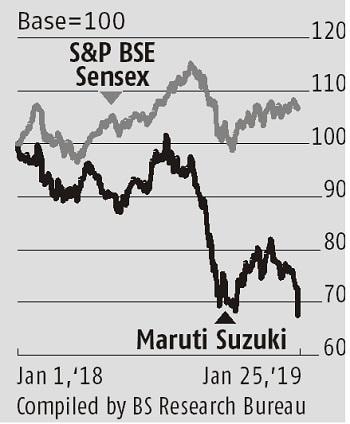 Further, marketing costs on the back of two new refreshes (WagonR and Ertiga) was one of the reasons for other expenses moving up by 300 basis points to 15 per cent.

While costs both on account of raw materials as well as forex are expected to ease, the key for the street will be demand momentum.


While Maruti Suzuki continues to outperform the market, the management indicated that demand on the back of higher product costs (insurance), interest costs as well as fuel prices has been soft.


Barring the new variant launches, improving sales volumes has been an uphill task with consumer deferring purchases. Sales for the company in the fiscal so far are up 6.5 per cent as compared to the sector growth of 4 per cent.


Given the muted demand, the company may have to do a rethink on the price hike and may have to keep discounts levels high to improve volumes and bring leverage into play. As things stand, there are limited triggers for the company and brokerages expect the stock to be under pressure in the near term.