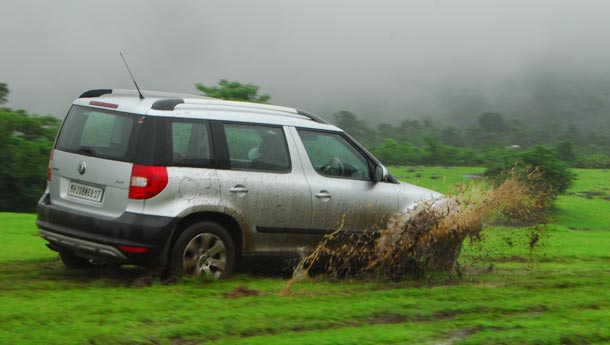 Another year, another Slush Fest. Yup, we got our socks dirty, our shoes all covered in wet soil and when there wasn't enough material to dirty, we got the lower halves of our pants in just a similar situation. We didn't have as many competitors as last year, but trust us we had a lot of fun. A lot!

What it also did was highlight the basic differences between vehicles and how the right tyres can get one out of situations. Road-biased tyres on one of the vehicles with an off-roading lineage behind it, couldn't save it from eventually sinking its shoes into a trail that had been partially softened by vehicles before it. In fact, the sole purpose of bringing it along was to help save other vehicles in dire need, but it got itself all tied up in a knot.

Another vehicle, the smallest of the group, turned out to be a very big surprise. On any other day, it's best doing its job of picking up groceries, tackling urban potholes or the like, but come Slush Fest day and it held its head up high and didn't get itself in a situation which it needed to be extricated out of.

But one of them turned out to be a charmer. One that sat quietly in the room, cracked two jokes and disappeared while the rest tried to get a grip of themselves. It turned out to be one of the heaviest, certainly the longest, yet its services were called upon when the others were left a bit floundering.

You could say, this year's Slush Fest wasn't mega - at least not where numbers are concerned. But as far as tonnage goes, it could certainly rival up there with the heaviest. I wish I could tell you more, but then again, I would like you to experience them in all their glory in our upcoming September issue.